What is it about the festive period that encourages British people to entertain themselves with ghosts? The tradition of spectral tales at Christmas developed in the Victorian era, and persists with twentieth-century television adaptations of supernatural stories. Charles Dickens, as editor of Household Words and All the Year Round, was fond of releasing special Christmas editions of these periodicals which featured abundant uncanny tales, and his famous festive novella posited Christmas Eve as a time in which spectres of all kinds returned to the living world. Uncanny narratives seem to lose some of their magic if read on sunny days, and so the darkest, coldest nights of the year are the best times at which to consume them. There is also a certain sense of mischief in the ghost’s alliance with Christmas. The festive period – with its sense of promise and expectation, generosity and family fun – is perhaps the least convenient time for unwelcome visitors to penetrate the domestic space… and the time at which they are most likely to do so!

Special Collections houses a great range of ghostly material in its Ferguson collection, much of which is beautifully illustrated. This blog, which focusses on publications from the late nineteenth and early twentieth century, provides a glimpse of just a few of the available sources.

At Hallowe’en, the Special Collections blog discussed a sensational tale by the Irish author Joseph Sheridan Le Fanu, who greatly influenced the arguably more famous M. R. James. James was a medievalist Cambridge scholar who often entertained his undergraduate students with red wine and ghost stories at Christmas. While James rightly described Le Fanu as ‘absolutely in the first rank as a writer of ghost stories,’ for many modern readers James himself remains the master of the form. His staid male narrators and gloomy academic settings might seem formulaic in other hands, but James’s power lies in his understated moments of revelation. His otherworldly creatures are seldom described meticulously, but instead horrify their spectators in their transition from inanimate to sentient. Who could forget, for example, the insomniac who thrusts his hand beneath his pillow to encounter what feels like an animal’s mouth? Or the damp, leathery bundle which, when coaxed by the treasure-seeker, ‘slipped forward, and put its arms around‘ the poor man’s neck? 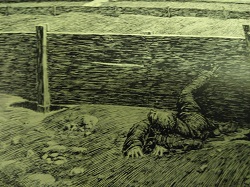 Another macabre illustration by McBryde (Al-d.54) 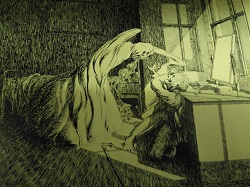 Special Collections hosts two collections by M. R. James: Ghost Stories of an Antiquary (1901) and More Ghost Stories [of an Antiquary] (1911). The first of these features four illustrations by James McBryde, a friend of the author who died while completing the commission. James refused his publisher’s suggestion that another artist could provide more drawings, explaining in his preface that he ‘wished to give a permanent form even to a fragment of [McBryde’s] work … here a remembrance is made of one in whom many friendships centred.’ It is indeed unfortunate that McBryde’s input is so sparse, as these four illustrations capture the spirit of James’s narratives: the desolate landscapes, the ambiguous horrors hovering on the margins, and the mild academic complacency unaware of the impending menace. The collection includes many of James’s most famous and frequently anthologised works, such as ‘Canon Alberic’s Scrapbook’ and ‘Oh Whistle and I’ll Come to You’. All of the included tales are undoubtedly entertaining, but readers disagree about which are the most horrifying. Whether dealing with demonic forces or uncanny children, haunted pictures or cursed books, these tales provide stellar examples of the supernatural’s disturbing invasion into the mundane everyday world.

Although the second volume arguably contains less classics, tales such as ‘Casting the Runes’, ‘The Tractate Middoth’, and ‘The Stalls of Barchester Cathedral’ can be ranked alongside other Jamesian chillers. While many of James’s tales focus on interrogative academics who unwittingly unleash ancient evil entities, ‘Casting the Runes’ is a slight departure insofar as the sinister alchemist Karswell knowingly draws on such powers in order to thwart his rivals. The story opens with a series of letters from a Secretary of a certain association, informing Mr Karswell that his submitted paper has been rejected. The subsequent letters suggest that Karswell becomes increasingly belligerent in demanding to know the name of the authority who refused it, and the Secretary remarks to his wife that he hopes that Karswell is unable to discover that it was Mr Dunning who made the final decision. ‘However,’ the narrative informs us, ‘Mr Karswell was an astute man.’ The Mr Dunning in question begins to experience some strange events, in which the name ‘John Harrington’ recurs. When he meets Harrington’s brother and discovers that the late John experienced similar occurrences shortly before his violent death, the two living men join forces to try and save Dunning from whatever evil Karswell has set upon him. Whether they succeed or not shall be left a mystery for subsequent readers. It should be remembered, however, that James’s universe is not one in which civilised modern subjects always triumph.

Special Collections’ edition of More Ghost Stories is also worth examining for its lively range of advertisements for several 1911 novels. One for James’s previous volume of tales provides some beautifully old-fashioned advice on the proper way to consume a ghost story:

‘if during the Yule-tide you wish thoroughly to enter into the spirit of the season, procure a good tumblerful of creature-comfort, steaming, with a trifle of powdered nutmeg in it, some thin lemon peel, and a grain of sugar, place it on a small stand beside your old arm-chair, in which you will have comfortably deposited yourself, and well gently inhaling the Virginian fumes in the presence of a cheerful Yule-log fire commence reading the “Ghost Stories of an Antiquary,” by M. R. James … On rising to retire to bed, say, when the clock is striking the hour of midnight, you will be heartily glad of a brave companion, who will assist you in ascertaining that all bolts and bars are scrupulously fastened, that all doors are locked, that there are no weird arms coming out from behind any curtains.’

Over a hundred years later, the idea of a fireside ghost story and a hot festive drink still sounds appealing on a cold winter’s night. 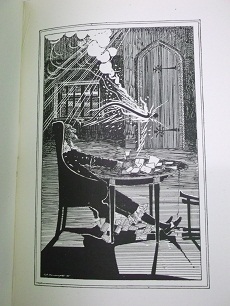 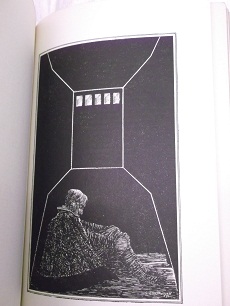 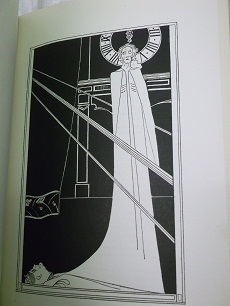 ‘The Masque of the Red Death’

This collection, edited by Margaret Armour and illustrated by her husband William Brown MacDougall, offers a plethora of evocative tales from both sides of the Atlantic. While the reader may already be familiar with some of the chosen works, there are one or two relatively unknown treasures. The collection does not focus exclusively on ghosts, but also encompasses folklore, the Gothic, and sensational fiction. The stylised illustrations by Glaswegian illustrator MacDougall provide effective companions to these works. MacDougall contributed artworks to the infamous fin de siecle journal, The Yellow Book, and, alongside his wife, collaborated with its art editor Aubrey Beardsley on various projects. There are certainly echoes of this aesthetic journal in the strange, Art Nouveau illustrations that appear throughout this collection.

The front cover of Armour and MacDougall’s collaboration (Ak-d.69)

The Eerie Book features two mid-century tales by Edgar Allan Poe, the master of American Gothic. ‘The Masque of the Red Death’ (1842) and ‘The Cask of Amontillado’ (1846) are typical of the author’s unsettling style. The first of these, like ‘The Fall of the House of Usher’, draws on anxieties about degeneration, in presenting a lavish castle shut off from the masses. This separation is designed to protect the aristocracy from a fierce disease that has decimated the town; however, the Bacchanalian excesses celebrated within the castle are gradually shadowed by a mysterious stranger. In the later (and much shorter) tale, the reader is immediately informed that the narrator feels great animosity towards his former friend, the wine connoisseur, Fortunato: ‘The thousand injuries of Fortunato I had borne as best I could, but when he ventured upon insult I vowed revenge.’ It is thus clear that the narrator’s promise to show this man a cask of expensive wine has an ulterior motive. Despite this knowledge, the reader cannot but help hope as Fortunato is led deeper into the narrator’s labyrinthine vaults…

A Poe-esque atmosphere of claustrophobia and dread is also created in George W. M. Reynolds’ ‘The Iron Coffin’, extracted from his novel Faust (1847). Although his work is little-read nowadays, Reynolds was hugely popular in the mid-Victorian period, especially among the working classes. His serialised narratives borrowed heavily from Gothic novels, with their gratuitous use of violence situating them as ‘penny dreadfuls’. One of his most famous serials, The Mysteries of London, ran for four years, with its weekly instalments selling up to 50,000 copies each. ‘The Iron Coffin’, though somewhat subdued in the beginning, culminates in a thrillingly lurid conclusion that epitomises Reynolds’ style.

The collection also includes an abbreviated version of Mary Shelley’s seminal Frankenstein, and macabre tales by Scottish author Catherine Crowe. (Crowe’s study of the supernatural, The Night Side of Nature, can also be viewed at Special Collections.) Other contributors include Hans Christian Anderson, the Reverend Bourchier Wrey Savile, and Robert Chambers. 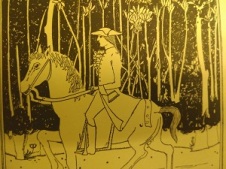 Another illustration from The Eerie Book (Ak-d.69)

Of course, tastes in literature vary so greatly that not everyone will appreciate this book. The original owner – John Ferguson (1838-1916), whose impressive collection of alchemical, chemical, and occult literature provides the source of this blog – was less than impressed. Ferguson, who seemingly acquired his copy in 1908, has pencilled some scathing comments at the back of this collection:

The pictures are not eerie. They are only wretched productions under the corrupt influence of Aubrey Beardsley. The stories are not in the least eerie, the only two that claim any merit at all are those by Savile.
It is difficult to see what was aimed at in printing this book at all.

So is The Eerie Book a stylish blend of ghostliness and aestheticism, or an unnecessary contribution to an overpopulated genre? Have a look and decide for yourself!

A Lighter Take on the Genre: Jerome K. Jerome, Told After Supper (1891) 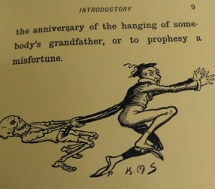 A comic image from Told After Supper (Al-d.68)

The front cover of Jerome’s pastiche

The ghost story’s familiar conventions have inspired parodies, an amusing example of which can be found in Jerome K. Jerome’s Told After Supper. Jerome is known for his comic novel Three Men on a Boat (and its various sequels), and his wry sense of humour also shines through in his pastiche of the ghost story. He opens by presenting Christmas Eve as a kind of box social for the undead:

‘It is always Christmas Eve, in a ghost story. [It] is the ghosts’ great gala night … everybody in Ghostland who is anybody – or rather, … every nobody who is any nobody – comes out to show himself or herself, to see and to be seen, to promenade about and display their winding sheets and grave-clothes to each other, to criticise one another’s style, and sneer at one another’s complexion … Blood-curdling shrieks and marrow-freezing gestures are probably rehearsed for weeks beforehand.’

This tongue-in-cheek tone infuses the rest of the volume, as the narrator recounts various spectral encounters experienced by his friends. The work closes with an especially humorous description of the narrator’s own supposedly uncanny experience. Special Collections hosts an edition of the book with over 90 illustrations. These images contribute greatly to the collection’s sense of humour in balancing macabre creatures with cartoonish startled subjects.

Another image from Jerome’s collection

Whether you’re seeking a lurid tale or an understated chiller, a melancholy ghost story or a humorous take on the genre, you’re sure to find something of interest in Special Collections’ rich array of supernatural fiction.