November 2015 marks the 150th anniversary of the definitive publishing of the much-loved Alice’s Adventures in Wonderland by Lewis Carroll. It’s not surprising that the satirical and witty Alice and its sequel Through the Looking Glass (1872) was such a success as most children’s books of the mid-Victorian period were instructional or were dry tales with a pious moral message. Alice was enjoyed by adults as well as children and this iconic book, which has been translated into at least 97 languages, has an enduring appeal and influence which extends into the present day. 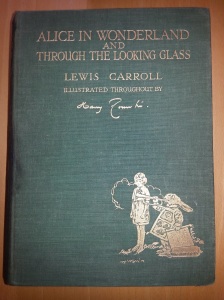 Lewis Carroll was the pseudonym of the Reverend Charles Lutwidge Dodgson (1832-1898), a shy mathematics don at Christ Church, Oxford. He was extremely fond of children and loved to entertain them with stories, puzzles, and games he had devised. The Alice books were based on stories he told to amuse the three eldest daughters of the Reverend Henry George Liddell, Dean of Christ Church. Many of the characters in the books would have been instantly recognisable to the girls as they were based on people they knew, in and around Oxford. Alice Liddell was Dodgson’s favourite and it was she who became the heroine of the stories and pestered him to write them down for her. This Dodgson duly did and entitled the story Alice’s Adventures Underground. Written in sepia-coloured ink and including 37 pen and ink illustrations, the manuscript was presented to Alice as an early Christmas present on 26 November 1864. When Dodgson was later encouraged to publish his manuscript by his friends, he made some changes to the story, removing some of the family references which had been included for the amusement of the Liddell children, and added two new chapters, ‘Pig and Pepper’ and ‘A Mad Tea-Party”.

He then employed the Punch artist John Tenniel (1820-1914) to illustrate the book. Tenniel’s working relationship with Dodgson was tempestuous as both men were perfectionists, but, although there have been countless different illustrators over the years, Tenniel’s drawings are still the ones most people visualise when they think of the Wonderland & Looking Glass characters. The book was published by Macmillan under the new title Alice’s Adventures in Wonderland in 1865.

In our Hepburn collection, as well as having a first edition copy of Through the Looking Glass, we have a 1928 edition of Alice’s Adventures in Wonderland, copiously illustrated by Harry Rountree (1878-1950), a New Zealand born illustrator who worked in England at the turn of the 19/20th Century. Specialising in animals, he illustrated several classics of children’s literature including Uncle Remus and Aesop’s Fables, amongst many other books, magazines and annuals, between 1903 and 1942 and was much sought-after by publishers. Sadly, he died forgotten and in poverty in St Ives, Cornwall on 26 September 1950. 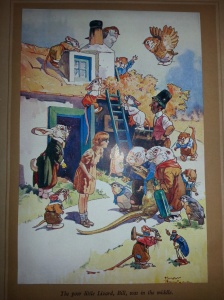 Like Loading...
‹ Tell us about how you use the Library – £15 Amazon voucher in return for your feedback
Newly published Official Publications 18.11.15 ›