Vesalius’ 1543 Fabrica: who owned it and how was it used?

When it comes to Andreas Vesalius (1514–1564) and his De Humani Corporis Fabrica considerable quantities of ink have been spilled over the years detailing the groundbreaking contributions to the history of medicine, the history of book illustration and to the spread of scientific knowledge. To quote a leading expert, Professor Vivian Nutton, the Fabrica is ‘one of the great books of the world, in every sense of the word’*. We hold two copies of the 1543 first edition (alongside a range of other important Vesalius works) which we’ve written about at length previously. However, what we haven’t discussed is who owned these books – their provenance. What sorts of people would buy a copy of the Fabrica and is there any evidence remaining in our books as to how they might have been read or used?

Sacrum and coccyx as depicted in the Fabrica (Sp Coll Bi6-a.5)

When it was first published in 1543 the Fabrica was a big, imposing and above all, expensive book. It seems to have sold for something in the region of 4 or 5 florins, equivalent to perhaps a couple of weeks wages for a skilled craftsman, or a couple of months wages for a rural pastor**. It would therefore have been unaffordable to most. As Vivian Nutton points out, it was squarely aimed at “European intellectuals who could appreciate the style as well as the content of the book and who could afford to pay for it”. The intended audience was certainly not students or “small town surgeons with a smattering of Latin”. Does provenance evidence in our copies of the Fabrica bear this out?

Well, seeing as medical historian Dr Dániel Margócsy of City University New York (CUNY) and his colleague are currently conducting a census of all known copies looking for details on ownership and annotation, we’ve taken the chance to look closely at our two first editions and to try to piece together each copy’s life story.

Copy one (Sp Coll Hunterian Z.1.8) arrived here in 1807 as part of the exquisite 10,000 volume library of the 18th century anatomist, physician and bibliophile William Hunter (1718–1783). It’s no great surprise that Hunter owned a copy since this work intersected with so many of his areas of interest. As an inscription in Hunter’s hand (and the presence of Mead’s tell-tale ‘double-comma’ shelfmark) confirms Hunter purchased this volume (either directly or via a third party) from the library of eminent physician and collector Richard Mead (1673–1754). The Mead sale took place over a few weeks in 1754 and 1755 and was a major event for book collectors, attracting buyers from all over Europe. Hunter acquired numerous books previously owned by Mead, including several incunabula, and some important Vesalius material, including a deluxe vellum copy of the 1543 Epitome (an abridgment of and companion work to the Fabrica) and what are possibly preparatory drawings for the Fabrica.

While the book’s ownership by these two eminent physician-collectors is interesting, it’s the earlier, 16th-century provenance that is perhaps more remarkable. On the front pastedown is an early 17th century note in Latin by Paul Portail (c. 1560–1643?), a Counselor to the Parlement of Paris, describing how it had been passed on from his father Antoine Portail (c. 1520 or 1530–1608), Surgeon in Ordinary to Kings Henri II, Francis II, Charles IX and Henri III, and First Surgeon to King Henri IV. We know little about Antoine Portail but from what we can ascertain he seems typical of one of the elite European readers for whom the Fabrica was apparently intended***. He was born in the Pyrenean province of Béarn around 1530 before moving to Paris to train as a barber surgeon. His wife Jaqueline de Prime was first cousin of Jeanne Paré, wife of the eminent surgeon Ambroise Paré (c. 1510–1590), and both men were working as surgeons to the King by the late 1550s. Clearly Paré’s life is more well-known and celebrated but both men’s careers flourished during the second half of the 16th century. When King Henri III was fatally stabbed by an assassin in 1589, it was Portail and colleagues who attempted to save him, and when this failed, it was Portail who carried out the autopsy****. In recognition of his abilities, Henri’s successor Henri IV appointed Portail First Surgeon to the King, a position he held until his death in 1608. 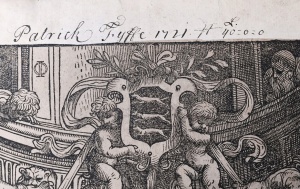 We’re uncertain exactly when our second copy of the 1543 first edition arrived at the University. Its shelfmark (Sp Coll Bi6-a.5) identifies it as belonging to the Old Library, the books acquired over the years for the use of staff and students, but it is certainly not listed in our 1691 or 1791 catalogues so must have arrived subsequently. The most recent identifiable owner is a Patrick Fyffe, who records on the titlepage his 1721 purchase of the work for £40 (given the large sum it seems likely that this is £ Scots = 1/12 £ sterling). However, like the first copy, the provenance trail in this book leads us back to France and a series of owners based in the small town of Bourg-en-Bresse north east of Lyon.

The earliest identifiable owner is “Claudius Nicolaus, medicus” according to an inscription dated 1544 – just a year after publication. A Claudius Nicolaus (presumably Claude Nicolas) from “dioc. Burgiensis” (i.e. the Bourg diocese) is listed as a medical matriculate of the University of Montpellier in 1530, and according to CERL, a physician called Claude Nicolas (active c. 1527), is listed as an owner of a book now held by the Bibliothèque Municipale de Lyon*5. Our Claude Nicolas could well be identifiable with one or both of these men. Certainly our book is linked with Bourg, as a further three provenances attest. Firstly an inscription, probably in the hand of town physician Jean Gallet (fl. mid 17th century), stating that the book was given to him by Master Paul Arbellot (fl. mid 17th century), surgeon in Bourg. Both men seem to have been active in Bourg in the 1640s according to documents available online from Bourg-en-Bresse’s Archives Municipales*6. The final Bourg-en-Bresse-related provenance records that the book passed to “Lud. Gallet Med. Nepos Joannis” (or Louis Gallet, also a physician, nephew of Jean).

While I can’t seem to find much information about these men beyond the odd municipal document, and while it is therefore difficult to say much with any certainty, what strikes me as fascinating about this list of early French owners is that they seem not to be from the European elite. They seem to be from a different social group from the Portails – altogether more provincial and less connected. There’s not much evidence regarding proficiency in Latin (save for ownership inscriptions!) but they really do seem to be the ‘small town surgeons’ (and in this case physicians) for whom Nutton suggests the Fabrica is not intended.*7

So what about use? Is there any evidence of how, or indeed if, these books were actually used and read. Well, unlike many surviving renaissance medical works, both of our copies are remarkably clean and unannotated. There is little in the way of marginal comments, underlining, nota marks, manicules, cross-references to other works, errata corrections, or any of the other paratextual apparatus one might expect as evidence of use. Both copies retain their fold out plates of the vascular and nervous systems and both retain the additional half-sheet of figures for the vascular system, which are occasionally missing or damaged having been cut out and pasted in. The main evidence of actual use comes from the Bourg-en-Bresse copy, which has the occasional miscellaneous stain or ink mark indicating the page has at least lain open. And it does have one tantalising and fascinating marginal comment in an early hand beside the skeleton on p. 163, “Sic transit gloria mundi” which arguably suggests (for one reader at least) a far more spiritual or existential response to the text and woodcut than the anatomical or medical reading one might expect.

The Fabrica was not necessarily the most accessible book: it was expensive, written in a tediously prolix style of humanist Latin and was an impractically large folio. It has been argued therefore, that it was not actually the Fabrica itself but the Epitome – particularly in its vernacular form – and the proliferation of unauthorised vernacular piracies incorporating Vesalius’s drawings which had the bigger influence on generations of future anatomists, physicians and surgeons*8. The absence of signs of intensive reading and use in our copies may well tentatively support this view. It will be interesting to see if other copies Margócsy and his colleague survey follow a similar pattern.

*See: Vivian Nutton, ‘Introduction’ to D. Garrison, M. Hast, Vesalius on the Fabric of the Human Body, at: http://vesalius.northwestern.edu/

**Sources on initial prices for the Fabrica vary: Kusukawa suggests the Fabrica retailed for 4 florins, 4 1/2 batzen (i.e. 64 1/2 batzen)  in 1543, Nutton suggests that Oporinus was selling it and the Epitome together in 1547 for 5 florins and 3 batzen (i.e. 78 batzen) while Urs Leu claims that Conrad Gesner paid 10 pounds (i.e. 80 batzen) for his Fabrica alone. See: Sachiko Kusukawa, Picturing the Book of Nature  (Chicago: Uni of Chicago Press, 2012), p. 200; Vivian Nutton, ‘Introduction’ to D. Garrison, M. Hast, Vesalius on the Fabric of the Human Body, at: http://vesalius.northwestern.edu/; Urs B. Leeu, Conrad Gessner’s Private Library (Leiden: Brill, 2008).

Thank you to Dr Dániel Margócsy, Hunter College, CUNY for this information.

****there is an interesting parallel here with Vesalius, who was sent for in 1559 by the leading French royal surgeons (including Paré (and perhaps even Portail?)) when Henri II was accidentally lanced in the eye during a jousting tournament. Unable to save the King, Vesalius conducted the autopsy. See Nutton, above.

*7 the exception is perhaps Jean Gallet, who styles himself “medicus regius” (i.e. physician to the king) in an inscription and who is identified in a 19th century history to the area as a Counselor and Physician in Ordinary to the king. Perhaps this suggests that the Bourg-en-Bresse medical fraternity are actually a bit more connected to the centres of power than I’m suggesting. It would be interesting to see if more can be uncovered regarding these owners. See: I. J. Brossard (1899) ‘Samuel Guichon’ Annales de la Société d’émulation, agriculture, lettres et arts de l’Ain, XXXII, p. 185

8* See for example Laura Robson, ‘Spoiled by a Certain Englishman? The Copying of Andreas Vesalius in Thomas Geminus’ Compendiosa’ in Books, Health and History the New York Academy of Medicine blog.

Like Loading...
‹ James Lumsden and the Universal Trading Company
Farewell to our trainees- thanks for all your hard work! ›