Home › Archives and Special Collections › “Poetry About Everything, Words About Nothing”: a consideration on Edwin Morgan and John Cage’s approach to creativity.

“Poetry About Everything, Words About Nothing”: a consideration on Edwin Morgan and John Cage’s approach to creativity.

This article aims to draw a connection between artists Edwin Morgan and John Cage, focusing on their common interest for Modernist techniques, and their view on art and perception.

Sometimes authors who never had a chance to meet navigate on similar currents and reach similar shores, by methods which, however different, are used with the same intention. When it comes to Edwin Morgan and John Cage, one could argue that not only they did sail on boats from the same manufacturer and reach similar shores, but that they also look at the same fish on their way there.

John Cage is an eclectic artist who borrowed techniques from the modernists, and has changed his practice multiple times throughout his life. What he has never changed was his openness and clarity in making art, and his desire to share the wonder he had for everyday images and sounds.

Similarly, Edwin Morgan is renowned for his poetry, his sincere love for art of all kinds, and his love for the city of Glasgow. Like Cage, he explored sound poetry and visual poetry, in both jest and seriousness, open curiosity and methodical research. 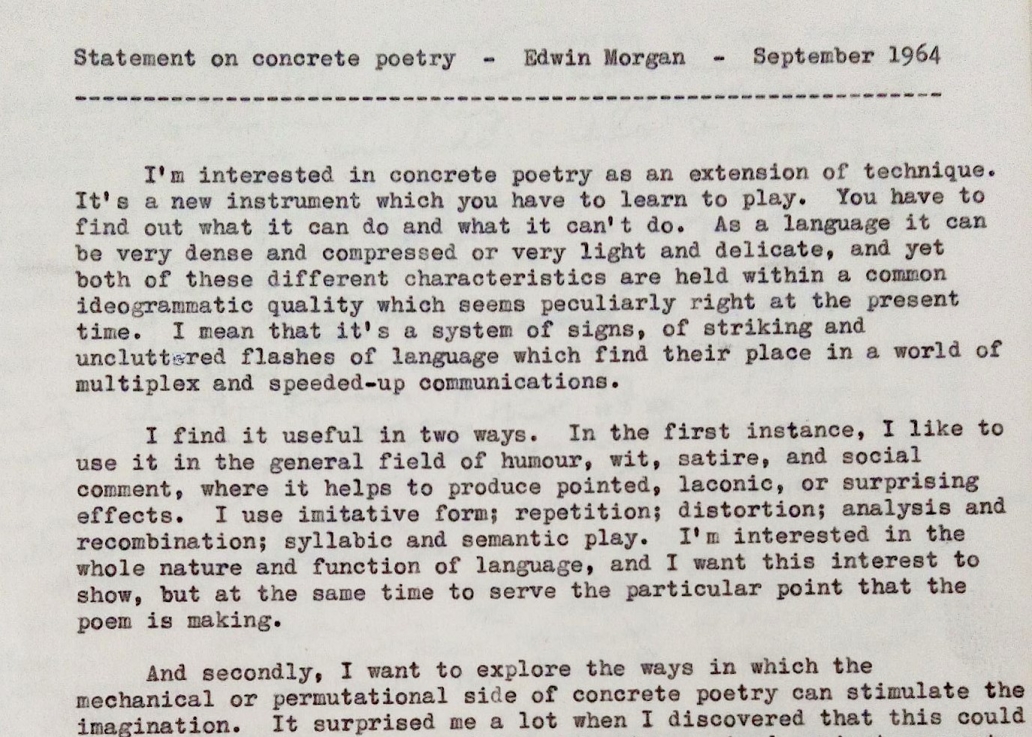 Morgan had a keen interest in concrete poetry, and had studied different movements of the 20th century, including futurism, a movement which, albeit extremely radical and anti-traditionalist, often vulgar in its manifesto, and nearly totally driven by aggression and defined more by the desire to destroy than that to create, has however given great contribute to modernism in poetry, and has been amongst the first to start what would have become concrete poetry.

And in the book Into the Light of Things, author George Leonard identifies John Cage as a product of late-futurism, paralleling futurism to a natural shift of the already-present wordsworthian focus on the author’s surroundings, the surroundings having shifted from the natural, quiet ones of a garden, to the chaotic flurry of the cities in the wake of the new industrial revolution.

It would be easy to use this point to connect Cage to Morgan to futurism: both of them were coherent in giving attention to the moment, the still image of life as it moved in its simplicity, but while we can argue that the futurists did have an appreciation for the sounds of the city, and did contribute to modernism and concrete poetry with the essay Parole in Libertà, Leonard’s point ignores many of the points of the essays where Marinetti completely and brutally rejects tradition, to the point of suggesting to burn and demolish museums, libraries, and institutions, incited war and art as a tool of dominance and revolt.

It is enough to have a basic knowledge of Cage’s beliefs, and a look at one of Edwin Morgan’s scrapbooks, so full of articles regarding marvels, other countries, and little moments, to realise that, however Cage and Morgan have both used some instruments the futurists attributed to themselves (such as sound poetry and visual poetry), however the intention to their art was different: if the futurists wanted to use their arts to destroy their current and their past institutions, and fuel warmongering, Morgan and Cage seemed to make art to celebrate life and appreciate the moment in which they lived: while the futurists were projected onto the future, Morgan and Cage, even in their computer-related works, are more an expression of the enthusiasm the world had towards the new technological discoveries, dreaming of alien contacts and new possibilities given by computers. So, similar methods, but different currents, one negative and focused on speed, the other, positive, focused on the present.

So, I believe that to answer or question we need to ask ourselves why Edwin Morgan and John Cage made experimental art, and I believe the answer lies in the way they wanted their audience to read their work, and that theirs is an answer to a problem on perception and familiarisation first brought up in the 1920s by Shklovsky.

Shklovsky’s concept of art is to place it as a tool to remove objects from “the automatism of perception” (Shlovsky, 1917), which would make the perceiver unaware of even annoyed by their daily sounds and images. Because daily life is so common, it is easier to codify it with diagrams and symbols which are more readily translated. And given this possibility, artists can so code ordinary objects in a way that will make them extraordinary again in the eyes of the perceiver, now forced to give the object their time and to re-evaluate their meaning and place in the world once again as if it were the first time. Art, therefore, becomes an instrument to appreciate life as it is. Edwin Morgan wrote about visual poetry:

What ‘visual poetry’ does is foreground and specialize and extend and sharpen something which has always been there. (Edwin Morgan, 1998)

How do we achieve dishabitualization? One answer is to focus on spatial awareness. According to Morgan:

… This central concept of the spatial involves a search for systems of arrangement of the elements of the poem … and this search leads concrete poetry in the direction of the objective… that’s to say, you’re often dealing with formulas of … or permutations and combinations. (Edwin Morgan, 1965)

This is very similar to Cage’s desire for people to notice the sounds and objects around them, well shown in multiple interviews, in his most famous musical composition 4’33’’, where the sounds of the concert derive from the concert goers and the sounds that may be happening inside the concert hall and outside it, instead of from the musician performing, in his paintings, and in his poems. The belief that no sound or image is useless or annoying, and that there is therefore no real silence or empty space makes it follow that in his work we should look not only at what is stated, but also at what is left unsaid and unexpressed.

And if spatial awareness is an excellent tool to fight habitualization and shed new light to the ordinary, so is the aleatory methodology of John Cage in which Morgan showed interest.

The process of chance, in Morgan more controlled than in Cage, forces the perceiver to look at a work of art through different parameters that establish more distance with its author, and forces the author to challenge their own method by implementing an external variable they have little control of, and to which they have to adapt. This call for adaptation generates new forms which can in turn be used to fight the habitualization Shklovsky talks about in his essay.

Maybe it was with this feeling of kinship in mind that Morgan composed ‘Opening the Cage’, which we could consider a tribute to Cage, not just because it is structured around one of his quotes (“I have nothing to say and I am saying it and that is poetry”), but because the poem’s structure itself is very similar to something Cage would have approved of. 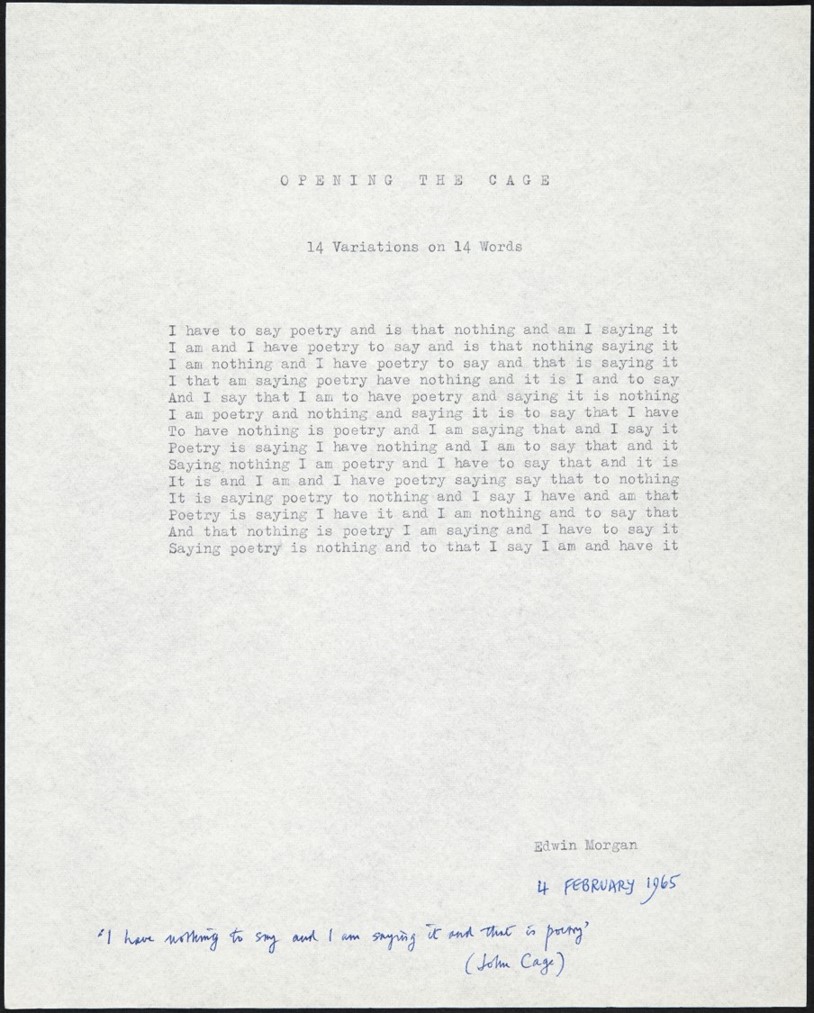 The poem has fourteen lines, each a variation of Cage’s quote, given by swapping the word order, which forces the reader to consider the meaning of each word in its new context, and pay close attention to its repetition, quite in concordance with Cage’s statement that:

… repetition has to do with how we think. … If we think that things are being repeated, it is generally because we don’t pay attention to all of the details. (John Cage, 1985).

Comparing Opening to Cage’s Lecture on Nothing, we find that while Lecture is fragmented, punctuated, with its sentences abruptly separated by a large space or the end of the page, Opening is privy of punctuation and flows freely. 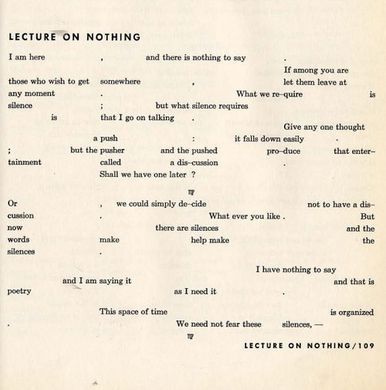 This is a precise spatial composition which, ultimately, forces the reader to stop and absorb each part of the line before moving on to the next; on a first, rapid read, the words tend to flow into each other, and the sense of the sentence, and its structure, is lost to speed. But if one steps back and takes more consideration, giving each line its deserved attention, one may discover the sense of the poem.

So, in conclusion, we can lay down the similarities to those two very eclectic authors as a product of a similar need to paint the ordinary in a way that would reflect the marvel weaved within it, a wise usage of space and contrast brought to them by their love for graphics and visual art, and an appreciation of sounds as they come, meaningless sounds assuming meanings, lines of thoughts framing empty spaces, images and motions that stay still to those who rush through life, but become crystal clear to those who stop and give them full attention and time. 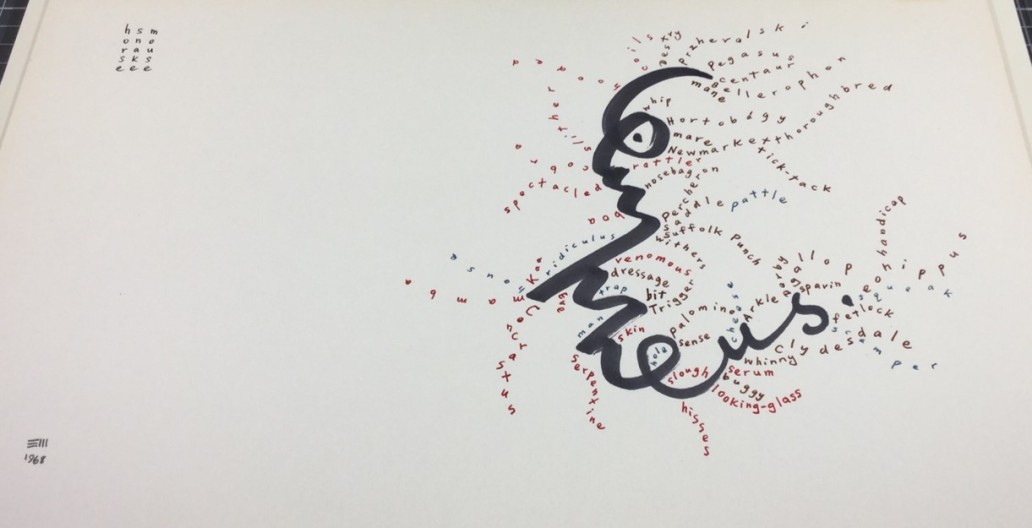 Cage, John. Lecture on Nothing. Music A18 CAG2. University of Glasgow Library

Like Loading...
‹ From the Inquisition to Impressionism : new books in the Library, 20th May 2019
Banking Scams, Leadership Elections (Conservative Party), and Travelpac Data – New Official Publications 28.05.19 ›