I have undertaken an archival project with the Scottish Theatre Archive, focussing on the archive’s collection on Dundee Repertory Theatre. The archive’s large collection of nearly three thousand documents includes drawings and plans, photographs, programmes, leaflets and press-cuttings, minutes of meetings and correspondence. The theatre is of particular interest and importance to me as I studied my undergraduate degree at the University of Dundee from 2014 to 2018. I was therefore fortunate enough to experience numerous productions. I still visit the city and the theatre regularly and have come to understand its major importance to the people of Dundee and Scotland as a whole. It is home to the Dundee Rep Ensemble, Scotland’s only full-time company of actors, as well as Scotland’s principal contemporary dance company, Scottish Dance Theatre. Dundee Rep is recognised to be among the top regional theatres in the UK, it plays to an average audience of over 70,000 people a year attracting a very broad cross-section of the local population in terms of age and occupation.

It was really exciting to work with the Scottish Theatre Archive’s materials, particularly in the Rep’s eightieth anniversary year. My research focussed on the Rep’s building work of 1979 to 1982. The company had faced disaster in June 1963 when a fire completely destroyed the Rep’s home at the Foresters’ Hall building. Temporary refuge was found in a converted church on the Lochee Road of Dundee although the company remained at the venue for a further 18 years. I discovered numerous letters in the collection and one from Lady Duncan of Jordanstone, Chairman of the Repertory Theatre Appeal Committee, highlighted the need for a new theatre (dated 9th October 1978).

“There is no Civic Theatre in Dundee and the Repertory Theatre is the only acting and producing theatre in the city. The present building cannot take even medium-scale touring companies of ballet, opera or drama…The new premises which will be open throughout the day will not only improve the facilities for the resident company and patrons and act as a conference hall, but will also allow touring companies to visit the city and generally enhance the tourist attractions of the area.

The cost of the new theatre will be almost £1,000,000. The City of Dundee District Council, the Tayside Regional Council, the Arts Council and the Scottish Tourist Board are all contributing to this cost, but it is necessary for the Board of Directors to raise at least £164,000 by public appeal. An Appeal Committee chaired by me has been set up and approaches to local industry, business and commerce have already raised almost half of this total. We are now asking the general public for donations…Donations will be recorded in a Roll of Honour to be preserved in the foyer of the new theatre and parts of the building or seats in the auditorium whose costs have been covered by a subscriber will have the donor’s name permanently on display.”

A progress report on the new theatre building, submitted to the June 1978 meeting of the Tayside Regional Council, Recreation and Tourism Committee, enlightened me to how the theatre obtained its current site.

“The University of Dundee has offered a site at Tay Square which is centrally situated in relation to bus routes etc. for a peppercorn rent on a 99 year lease.”

After negotiation with Dundee District Council and the Scottish Arts Council it was agreed that the company would have its own purpose built premises on land donated by University of Dundee. Work began in January 1979 under the leadership of Robert Robertson who had been Artistic Director for a number of years. On 5th May 1979, actor and the first rector of the University of Dundee, Sir Peter Ustinov, laid the foundation stone. 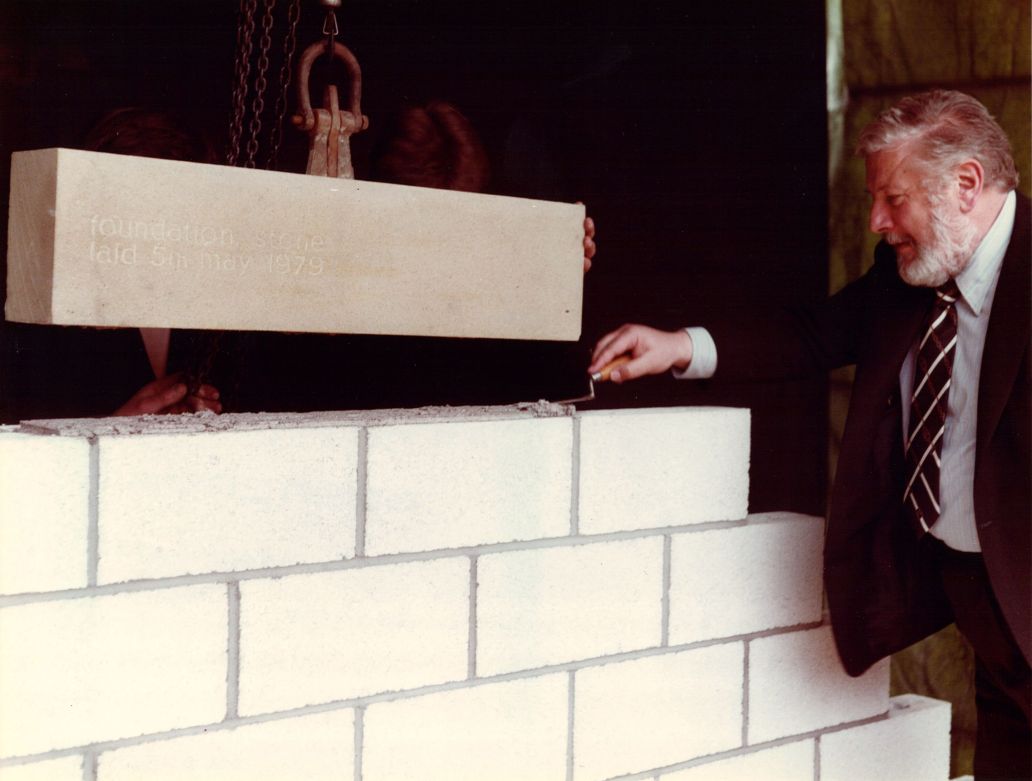 My archival project moved on to interrogate how the company managed to survive several challenges, most notably financial. The building work looked like being stopped in its tracks due to rising prices and inflation. This was due in part to the delay in construction and recession of the early 1980s. A September 1980 report taken at a meeting in the City Chambers highlighted these issues.

“A series of sustained objections to the granting of planning permission and of a building warrant were received from the owner of a property in Tay Square. This delayed the start of the programme and finally caused the building to be moved back 3.5 metres. This necessitated changes in the plans and caused the builder to start operations from the back of the site because of its restricted nature, where before he had intended to start from the front. The Rep Board were led by the Design Team to believe that these changes would have no serious effect on the building programme but, in the event, they have put back the completion date by one year. The change from a one and half year to a two and a half year building programme not only leads to an increase due to extra wages but increases the costs because of inflation on prices over the extended period. A realistic figure for the inflationary element over the two and a half year building period is 40% or higher and this explains almost all the increase with which the Rep is now faced.”

The chairman of the board of directors went on to highlight the severity of the situation.

“It is unthinkable that in a major city like Dundee a new theatre would be left uncompleted. It would also mean the death of the Rep which cannot continue to function in its present premises which are in a bad state of repair…The Rep is the only professional producing company in Dundee for any of the Arts. Without the Rep the cultural image of Dundee would decline and it would prove even more difficult to attract industry, business and commerce to the city.” 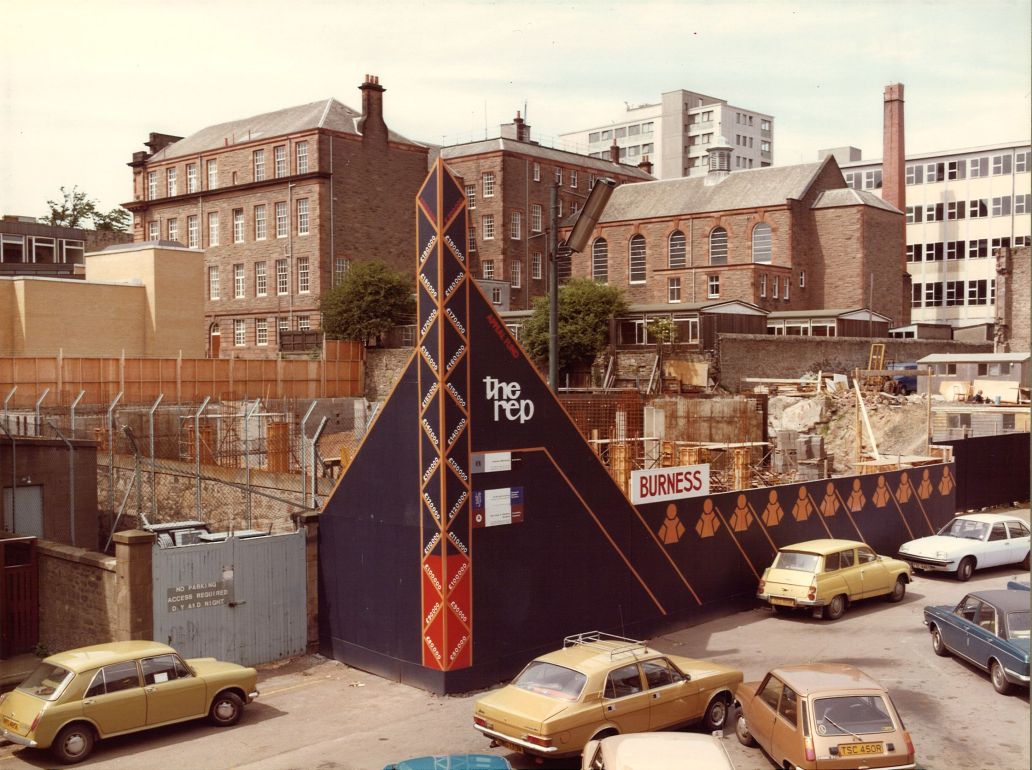 Through minutes of meetings and correspondence I was relieved to discover that disaster was obverted as additional funding from the councils was granted but more importantly a public appeal was launched and managed to raise a massive £60,000 in under six weeks, reaching an eventual total of £200,000.

The new theatre opened on 8th April 1982, designed by Dundee-based architects Nicoll Russell Studios. The firm was established in 1982 by Andrew Nicoll and Ric Russell as a result of the completion of Dundee Repertory Theatre. The building proved a great success with a personal 455-seater auditorium, providing one of the best stages in Scotland in terms of its relationship with its audience. It received a civic commendation from The Civic Trust Award in 1984 and in 1986 won the RIBA Architecture Award. The new building was a major cultural project for the city of Dundee, the likes of which were not seen again until the completion and opening of V&A Dundee in 2018.

You can find much more information about Dundee Repertory Theatre in the Scottish Theatre Archive collection within the Special Collections Department.

Dundee University Archive Services are fortunate to have Alex Coupar’s collection of day books, negatives and prints. The collection, MS 258, is in the process of being arranged and listed.

Like Loading...
‹ Brexit and consumer sentiment: breakfast Brexit (!) briefing with Mintel
From the Inquisition to Impressionism : new books in the Library, 20th May 2019 ›