Home › Archives and Special Collections › Edwin Morgan: The ‘Most Readable’ Translations of a Genius Poet. 17 May 2019

Edwin Morgan: The ‘Most Readable’ Translations of a Genius Poet. 17 May 2019

Over the past few months, I have been in the Special Collections in the University of Glasgow Library, which holds the Edwin Morgan papers, and the Scottish Theatre Archive. In particular, I have been looking into Glaswegian Poet, Edwin Morgan’s theatre translation works and his other translation works. This led up to him translating full play scripts later in his life. While conducting my research, I was looking to answer the question ‘how did Edwin Morgan’s translation work develop throughout his life?’. This blog post will focus on this question but will also look closely at the dramaturgies of Morgan’s theatre translations and how he created his final versions of translated scripts. I chose to work on this project as I feel Edwin Morgan’s influence in the world of theatre translation is not widely recognised outside of Glasgow and/or Scotland. I would like to bring his interesting works to a wider audience by showing how he translated in a unique way, as a talented poet, rather than as just a translator. By Morgan doing this, it greatly helped to convey immense emotion through his translations, something that is usually lost in this process.

Later in Edwin Morgan’s life he began to take an interest in theatre translations for varying theatre companies. The first full-length play script Morgan translated was The Blessed Apple Tree for the Medieval Players, performed on their autumn tour and at the Edinburgh Fringe Festival in Summer 1982. Morgan translated this play from the original Dutch into English, with the help of Jan Karel Kouwenhoven, who translated the play into a very literal form of English to help Morgan. From this roughly translated version (see fig. 3), Morgan was free to adapt and use his poetic skills to improve the play script into his own version (see fig.4), done through the dramaturgies of his translation, which brought together the final product. We begin to see clearly the dramaturgies of his translating becoming apparent in the drafts and pages of translation Morgan wrote. These drafts were created to tweak and change what he had written, in order to keep the original flair and ‘art’ he strived to save in his translation, through his skills as a poet. Morgan was praised tremendously for his work as translator, with Mary Brennan, a well published arts and theatre critic, even calling it ‘a marvelously attractive piece of theatre’ in an article saved by Morgan himself. Looking at Morgan’s work on The Blessed Apple Tree really gives us an insight into the process he used to translate and just how involved this process actually was. 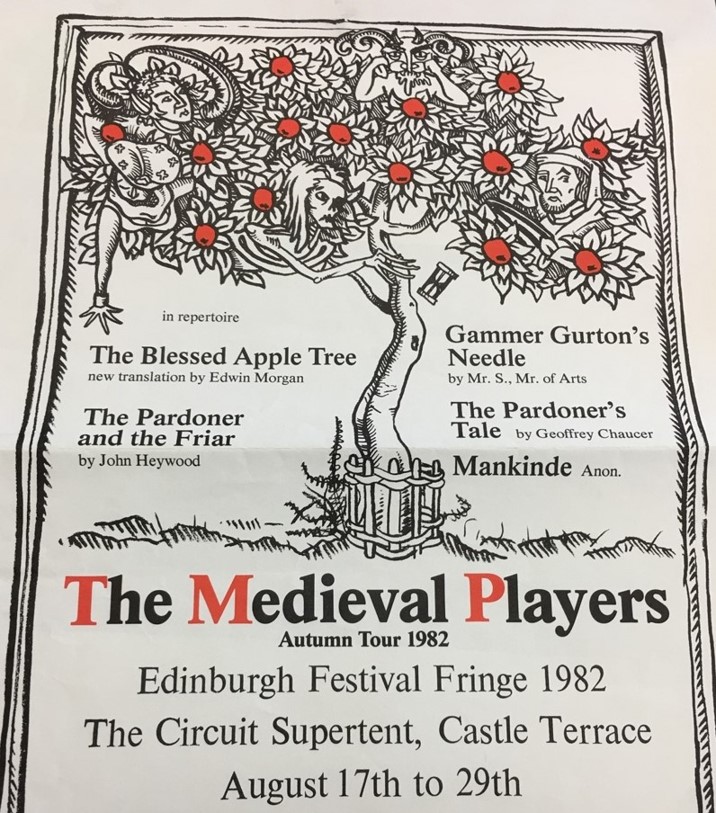 After Morgan ceased working with The Medieval Players in 1997, JET Theatre Company from London got in touch with him, through the recommendation of the recently disbanded Medieval Players, to discuss the translating and reworking of a few classic Kyogen theatre pieces into one full theatre production. For me, when I was researching into Morgan’s translations of theatre, this example helped me greatly in understanding Morgan’s whole translation process. We can see here that Morgan acquired a copy of the play already translated (see fig. 5) as a guide and began to rework and add to the text.  Morgan made the text more natural/speech like and less robotic (see fig. 6 and 7). He adds emotion and takes a ‘poetic license’ when re-arranging the script of The Cowardly Bandits, making the speech more natural and easy to follow for a modern western audience. He is able to add this emotion through the dramaturgy of his translations, which he has developed throughout his life as a poet.

In between Morgan’s translations of the theatreworks The Blessed AppleTree and Kyogen, he undertook the translating of a play commissioned by theatre company Communicado called Cyrano de Bergerac. The company was founded in 1983 and has been recipients of many awards, such as the Fringe First awards. The play was to be performed in Inverness on the 6th August 1992 before embarking on a tour of the UK. However, what makes this translation noteworthy is that Morgan didn’t just translate it into English; he went one step further and translated it from the source language of French into English and then into Glaswegian Scots! Again shown in this example (see fig. 8 and 9), the dramaturgy most prevalent in Morgan’s translation is how he inserts emotion into the texts and does not lose the feel or ‘art’ of the original. It is Morgan’s ability to convey the art of the original, while translating the text not once but twice that gives us an indication of just how much his love for languages and poetry impacts the way he approaches his work. The way he used his familiarity with the Glaswegian dialect to  unleash this wonderful translation, through the meticulous re-working and note taking,  shows just how his translation works evolved throughout his career.

In conclusion, we can see how Edwin Morgan’s translation work has developed throughout his life. His brilliant translation skills as a poet, which have been evident throughout all his work, allowed Morgan to dabble in the longer, more difficult translations, like Beowulf, which eventually led him to translating theatre works. Morgan’s ability to input feeling and emotion into his translation is, in my opinion, unparalleled. He transformed these manuscripts into a script that comes to life when you read it, just like plays do in their native language; he kept the original art of the plays alive, adding his own flair to them, as he felt necessary. I feel I lament too much on Morgan’s brilliance, for his mind worked in ways I only wish my own could.