Exposing the Cent Nouvelles Nouvelles to a modern audience

This semester, I had the opportunity to take on a work placement in the University of Glasgow’s Special Collections. Since January, I’ve been researching and cataloguing a 15th century French manuscript from the Library’s Hunterian Collection. MS Hunter 252 is the only known surviving manuscript copy of the Cent Nouvelles Nouvelles, a collection of 100 racy, bawdy tales told at the court of Philip the Good, Duke of Burgundy.

Each tale in the volume opens with its own illustrated miniature, painted by an unidentified artist or workshop, which depicts a scene related to the story. Ornate initials decorate the text, as well, including several decorated with animals such as lions, birds and dogs.

My role this semester was to research the Cent Nouvelles Nouvelles and produce a Flickr set to publish the images digitally as a complete. This meant I had to write descriptions—nearly 22,000 words in total!—for each image. These provide short summaries of each story and highlight the most interesting visual details. 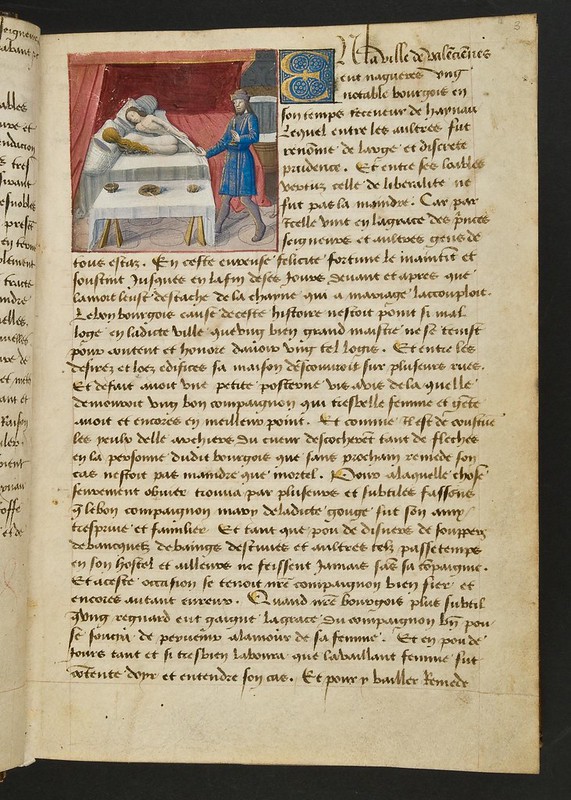 The Cent Nouvelles Nouvelles is an exciting manuscript because even though the stories may have similar themes, each tale is lewder and more absurd than the last. Some of the tales offer a small dose of morality, but most focus on subjects like the hypocrisy of the clergy or the extreme measures people take to deceive their partners.

One of my favorite tales is about a man who proudly proclaims that he will no longer make the sign of the Cross because he believes his baptism is enough to protect him from all evil. After this proclamation, he walks into the closet of an inn and finds a demon. He then fights the demon for over an hour and ultimately defeats it by grabbing it by the horns. The image is particularly humorous because it features a human-sized demon with a goat’s face (complete with its tongue sticking out!) and genitals designed to resemble a human face.

Launching this project on Flickr has been really exciting because it means that, for the first time, people around the world will have digital access to this manuscript. All of the images are presented in the context of their original folios to provide viewers a more complete viewing experience. It also presents intrepid French-speaking viewers with the opportunity to read excerpts from the earliest known version of the text! I’m hopeful that this album will be of value to academics embarking on new research, as well as interesting and accessible for casual internet browsers.

One of the best features of Flickr is the ability to zoom in on photos. In the case of the Cent Nouvelles Nouvelles, the zoom feature allows you to get a closer look at each folio than is possible in real life. Since the manuscript is over 500 years old, it is impossible (and really bad for its spine!) to open the volume so that it is flat. When examining the manuscript, I often found myself twisting my body at weird angles to try to get a closer look, especially to view miniatures on the recto sides of the leaves, which are closer to the inner margin of the volume.

This is why when my supervisor, Senior Librarian and Head of Special Collections, Julie Gardham, suggested that I meet with the Library’s conservation department to get a closer look, I jumped at the chance! Using a microscope camera, we were able to get digital images of some of the details that are almost impossible to see with the naked eye. One folio in particular, 19r, features intricate detail painted in gold along the ceiling. The way the gold contrasts with the green makes it hard to distinguish the colors from one another.

The microscope camera, however, provided an excellent, up-close view of the detail of the molding, and it turns out, it’s actually letters! Since I’m working on a degree in Art History and not Cryptography, I have not yet managed to figure out if there’s a secret code to be cracked from the jumbled letters.

Even though this copy of the Cent Nouvelles Nouvelles is hundreds of years old, it is in relatively good condition, with only minimal damage. But the microscope was also a great way to get a closer look at the small patches of damage scattered throughout, including those on folio 108r.

In this image, the crowd and setting are in good condition while the central figure, the Scotsman who is caught pretending to be a laundress, has two noticeable patches of damage. The first is near his neck and, somewhat luckily, does not impact his face. The second, however, is in a questionable location.

A section just below his penis is worn away, though whether from natural wear-and-tear or human poking and prodding is indeterminable. While we may never be able to determine what caused this damage, it’s funny to imagine groups of Burgundian nobles standing around the manuscript and pointing and laughing at such a lewd image.

Even though the Flickr album is finally up and running, my experience with the Cent Nouvelles Nouvelles is not over yet. My dissertation will focus on the prominence of the body in several images from the manuscript, including, another one of my favorites, folio 168v.

At first glance, this is your average dinner party, with a group of friends gathered around a table, drinking and making merry. In truth, the image is a phallic version of “Where’s Wally (Waldo, for my fellow Americans)?” with the man on the right making a “big” reveal. Oddly enough, this is one of the manuscript’s most directly adapted illustrations, and nowhere near the most graphic, though it is certainly one that caught me off-guard.

The most interesting takeaway from this whole experience is that even though this copy of the Cent Nouvelles Nouvelles is over 500 years old, our modern sense of humor really isn’t all that different from that of the 15th century.

If you’re interested in reading the Cent Nouvelles Nouvelles for yourself, a digital edition in English, originally published in the late 19th century, is available from Project Gutenberg.

Katie Lombardo was on placement in Archives & Special Collections at the University of Glasgow Library from January to April 2019.