**This exhibition ended on August 13th 2018. You can still enjoy the Bird’s Eye online on our map galleries here**

If you’re visiting the library in the next few months you’ll notice a new feature in our exhibition space just inside the library entrance. Thomas Sulman’s already impressive panoramic Bird’s Eye View of Glasgow from 1864 has been enlarged to an incredible 5 metres wide by 2 metres high. Now you can experience a true bird’s eye view of Glasgow during its mid 19th century industrial and economic boom period. You don’t have to be a student or member of staff to enjoy this opportunity, all are welcome! 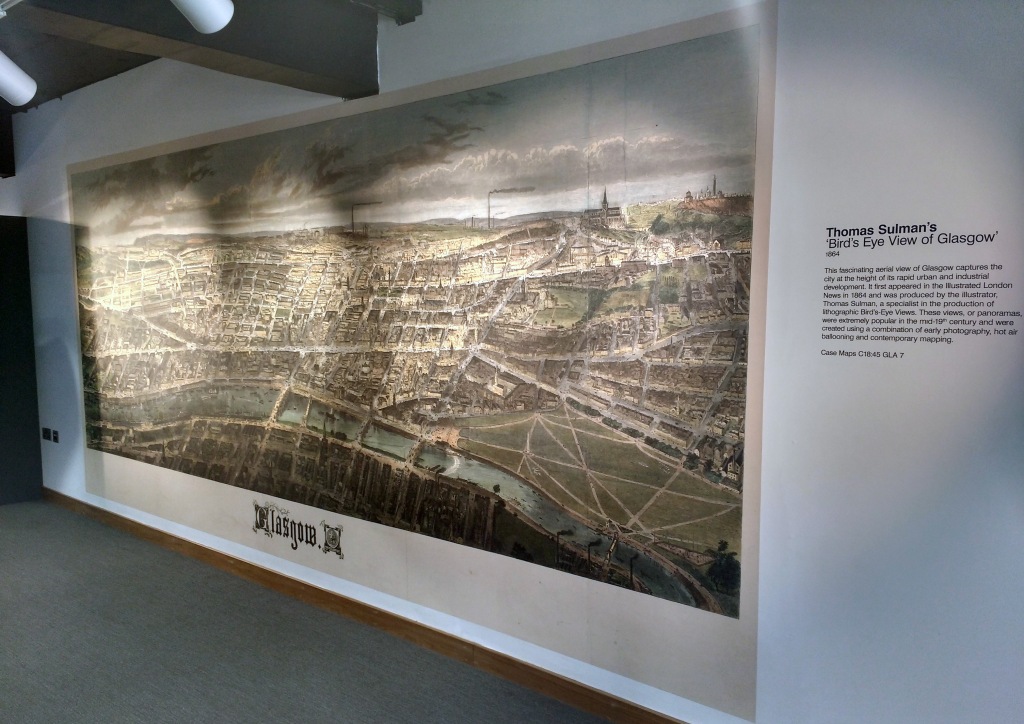 If you can’t make it in to see the Bird’s Eye in person, you can still enjoy all the details using the zoomable version on our map galleries.

The first appearance of Glasgow in panorama came in John Slezer’s Theatrum Scotiae, a book of views of Scottish Burghs, published in 1693. His Prospect of ye Town of Glasgow from ye North East is taken from the high ground of Wester Craigs, to the east of the Cathedral. The most likely means to produce this image is thought to have been by Camera Obscura, allowing the scene to be projected onto a flat surface.

Thomas Sulman, creator of this Bird’s Eye View, enrolled at the Working Men’s College in London upon its opening in 1854, aged 20, and trained as an engraver and illustrator. After his studies he fulfilled many commissions, including work for Dante Gabriel Rossetti, but made his lasting impression as Architectural Illustrator for the Illustrated London News between 1859-1888. During this time he became a specialist in capturing panoramic views of flourishing cities including London, New York, and here Glasgow.

It is thought that the advent of hot air ballooning in the 1820s played a major role in the popularisation of these panoramas. Granting a higher vantage point increased the field of view of the artist allowing for greater sweep and broader perspective. However the vast majority of the draughtsmanship would still have taken place at ground level and been informed by contemporary mapping.

This ground level mapping is evident in the remarkable level of architectural detail visible in the civic buildings, monuments and churches captured in this view. The perspective has been altered to exaggerate the affluent north of the city, and streets widened to allow these architectural features to be seen in full.

The frequently deepened Clyde teems with sail and steam shipping and its banks are packed with cranes and warehouses. The smokestacks of the thriving chemical industry of the era are seen to the northeast, a key driver of the westward expansion of the city. The foundations for new tenement buildings around Kelvingrove Park are further evidence of this westward movement. Every section of this panorama provides information for the viewer. Using our interactive touchscreen you can explore aspects of industry, travel, religion, and the rapid development of the city during the 1860s.

Birds Eye Views of cities in Britain began with a view of Oxford by Georg Hoefnagel in 1575, but it is with Sulman’s Bird’s Eye View of Glasgow they arguably achieved their finest expression.

You can find out more about Glasgow during this period in a series of blogs based on features of this map.

The map collection is on level 7 of the library in the Maps, Official Publications and Statistics department which is open between 9am-5pm, Monday-Friday. You can email us (library-mapsandop@glasgow.ac.uk), or call us during business hours on 0141-330-6740/3176, and we can answer any query you may have.