Home › Archives and Special Collections › Archibald A Bowman as Officer-Prisoner-of-War, 1918 by Laura Gould

Archibald A Bowman as Officer-Prisoner-of-War, 1918 by Laura Gould

Archibald Allan Bowman graduated from the University in 1905, was Assistant to the Professor of Logic from 1906-1912, and returned as Professor of Logic and Rhetoric from 1925-1927, and as Professor of Moral Philosophy from 1927 until his death in 1936. Both prior to and after WW1, he lectured at Princeton University where he held the Chair of Logic. His archival papers consist of some 39 standard boxes and many outsize items reflecting a wide variety of interests from both his personal and professional lives.

The catalogue previously only existed in Word format and during my time volunteering at ASC I have been working on the retro-conversion of the top levels of description. This means that the 11 key areas the collection is divided into are now available in a machine-readable format (EAD) which should help to make this valuable collection more accessible to potential researchers. This EAD version is now available to view via the Archives HUB please see

I was particularly drawn to the army material from Bowman’s time as a prisoner of war in Germany from April to November 1918. It opens up another potential avenue of WW1 research and reflects my own interests, having spent the past few years living in Germany. Bowman was a Lieutenant with the Highland Light Infantry, after obtaining a leave of absence from Princeton University in 1915 to join up. After his capture in April of 1918 he was initially interned at Rastatt near Karlsruhe, subsequently at Hesepe near Bramsche in western Germany, and finally from early October 1918 at Cologne where he remained for the duration of the War and the subsequent repatriation process. Bowman’s records from this time include notebooks (DC 077/2/3) and correspondence with his family (DC 077/5/2; DC 077/5/4). The postcards home show his attempts to assure his wife that he is physically well, in good spirits and kept himself occupied being both an interpreter and ‘chief lecturer to the camp’, as well as writing sonnets which he hoped to publish later on. I decided to focus on the notebooks, written in both English and German, through which we can obtain a more detailed picture of life for the officers in the camp, building on the snippets contained in the correspondence to his wife which was necessarily brief and bears the marks of censorship.

A lot of information can be gleaned from the papers relating to the Officer-Prisoner-of-War Committee, which held its first meeting on the 27th of August 1918. At this inaugural meeting, A A Bowman was elected Secretary.  The meticulous minutes (DC 077/2/3/2), and draft correspondence and notes (DC 077/2/3/3-5), show that this was a role to which he was well suited, aided by having a good knowledge of German, which he had picked up whilst studying in Germany during the summers of 1907-09. 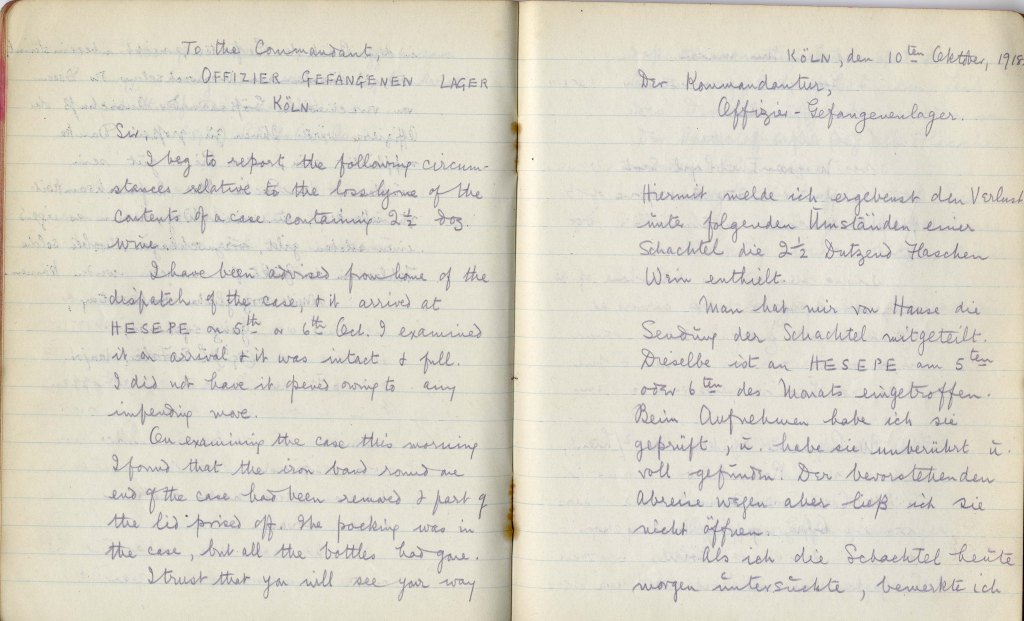 Notebook showing letter concerning the loss of bottles of wine, written first in English and translated into German by Bowman [DC 077/2/3/3]

The Committee’s activities revolved around organising the daily routine of the officers and improving the conditions in the camp, largely achieved through appealing directly to the Camp Commandant to whom Bowman wrote in German, having first carefully written out his intended letter in English. The subjects on which he wrote reflect mainly practical affairs such as the provision of coal for stoves, hot water for baths, the timing of lighting, postal services and exercise rights (walking and ‘play area’), requests to see the dentist and optician, and telegram postal services regarding the deaths of British servicemen from influenza. Requests to enjoy cultural pursuits such as the need for books, a reading room, a piano tuner for the piano, and the provision of language classes are also represented, all of which were granted.

Another fascinating item is a notebook, DC 077/2/3/19, which seems to have been a compilation of notes Bowman took on the German language that he picked up as he went along, or perhaps under instruction at German classes, and seem to date from February – March 1919 whilst he was waiting to be repatriated. It includes snippets of phrases to be reused and formal phrasing for letters such as ‘opening for a letter’ and ‘how to apply for jobs’, both of which reminded me of my notebooks from my time in Germany. They also provide a grim reminder of the conditions in which the prisoners at the camp found themselves, and the accidents that befell them, such as a list of diseases and accidents in German.

To read additional posts about the Papers of A A Bowman please see: