When we think of Plague, we tend to imagine the Black Death of the fourteenth-century, which had such catastrophic effects on the population of Europe. Yet plague recurred episodically in Europe until the 19th century, periodically erupting into fully-fledged epidemics. The Great Plague of 1665 – 1666 was the last outbreak of bubonic plague in England, during which an estimated 100,000 people died. Further epidemics occurred in Vienna in 1679 and in Marseilles between 1720 and 1722. The Great Plague of Marseilles was the last significant outbreak of bubonic plague in Europe with some 100,000 deaths. Even today, plague continues to strike remote areas of the world, often during environmental crises. Plague continues to return periodically to the island of Madagascar where healthcare resources are limited and cases have even been reported, rarely, in the United States.[1]

Plague makes us picture gross, suppurating sores – the buboes that burst from the skin and give the disease its moniker ‘the Black Death’. But plague can actually take three forms – the bubonic which is in fact the least lethal, infects the lymphatic system; pneumonic which infects the lungs and is much more virulent; and finally septicaemic plague. Septicaemic plague occurs when the infection reaches the bloodstream and overwhelms the system.[2] Recent debate has flourished over whether the black death of the fourteenth-century was in fact bubonic plague or was a terrible combination of the three forms of plague, spread by poverty, medical care and ineffective quarantine conditions. What has been firmly revealed through DNA evidence is that plague is caused by the bacilli Yersinia pestis (Y. pestis) which is found in the digestive tracts of fleas.

As a physician it is unsurprising that texts relating to the plague proliferate through Hunter’s catalogue. Physicians were challenged by the virulence of the disease, the speed by which it spread and the lack of verifiable antidotes. Despite the lists of antidotes offered by pamphlets collected by Hunter, beliefs that the plague was caused by toxic air, unusual weather or that it was divine punishment continued to flourish. It was therefore not uncommon for bonfires to be lit to remove ‘bad air’ and wealthy citizens continued to vacate the city during outbreaks of ‘pestilence’. Nevertheless some advances were reached. Firstly, physicians understood the plague to be a disease in its own right. Although they struggled to understand its exact nature and cause, they recognised that it was different from identifiable diseases that caused similar symptoms, including fever and skin rashes, such as measles and smallpox. Such knowledge helped to fight patients’ panic and prevent fear spreading through communities when epidemics erupted. Combined with civil measures, such as advances in quarantine, outbreaks of plague greatly reduced and the number of deaths diminished. During the Great Plague of Marseilles (1720 -1722) quarantine measures were well established. Ventilation was improved while the French authorities built a ‘mur de peste’ or plague wall in order to limit communication between the city and the rest of France. 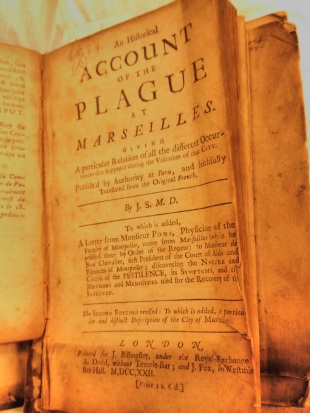 Sp Coll Hunterian Ek.2.9: An historical account of the plague at Marseilles… Translated from the original French [of Pichatty de Croissante]. By J[ohn] S[oame] M.D. To which is added, A letter from Monsieur Pons… discovering the nature and cause of the pestilence, its symptoms, and the methods… used for the recovery of the infected (London, 1722) 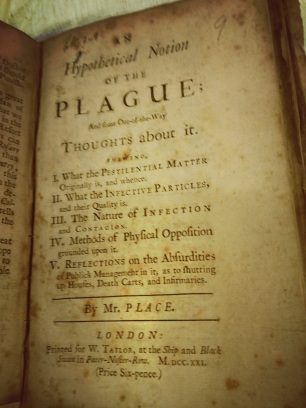 Sp Coll Hunterian Ek.2.9: An hypothetical notion of the plague; and some out-of-the-way thoughts about it… (London, 1721)

Hunter’s catalogue offers evidence of horror that the plague continued to engender in 18th century Europe. He owned several texts that recorded the events of the Great Plague of Marseilles (1720–1722) and several others that offered physicians’ opinions, thoughts and commentaries on what the plague actually was. Pamphlets such as ‘Some observations concerning the plague’ (Sp Coll Hunterian Ek.2.9) and ‘An hypothetical notion of the plague; and some out-of-the-way thoughts about it…’ (Sp Coll Hunterian Ek.2.9), both published in 1721, highlight that the nature of plague continued to divide physicians in Hunter’s time. Although the theory of miasma or poisoned air had begun to fall out of fashion, the theory continued to have some influence since Hippocrates and Galen had taught that toxic airs spread disease. The miasmic influence continued to be felt in Hunter’s time through the prescription of tobacco as a possible prophylactic to plague since the heavy fumes were felt to prevent the toxic air from reaching the person. Other antidotes included drinking coffee as suggested by the botanist Richard Bradley (1688-1732). Hunter’s copy of Bradley’s 1721 pamphlet ‘The virtue and use of coffee, with regard to the plague, and other infectious distempers …’ (Sp Coll Hunterian Ek.2.9) argues that the coffee plant suffered fewer insect pests than others because of its aromatic substances which were distasteful or even poisonous to insects. Bradley suggested that drinking coffee may then have similar effects, warding off insects which could cause pestilential diseases. Bradley’s approach, though outlandish to modern readers, did at least acknowledge the role of ‘pests’ in the transmission of illness and disease.

Sp Coll Hunterian Ek.2.9: Some observations concerning the plague. Occasion’d by… the late ingenious Discourse of… Dr. Mead concerning pestilential contagion… By a Well-wisher to the publick (Dublin, 1721)

Sp Coll Hunterian Ek.2.9: Richard Bradley, The virtue and use of coffee, with regard to the plague, and other infectious distempers … (London, 1721)

Find out more about the ‘William Hunter’s Library: a transcription of the early catalogues’ project