Through the Conservation Keyhole: Surveying the Adam Smith collection

Adam Smith was a moral philosopher, political economist and a central figure in the Scottish Enlightenment, perhaps best known by many as the author of ‘The Wealth of Nations’. He was Professor at the University, served as Dean of Faculties and as the library’s Quaestor (an official in charge of accounts), and he was elected to serve as Rector from 1787 to 1789. The University has a building, a library, a chair and a research foundation named in his honour.

I joined the University of Glasgow Library this summer to act as Project Conservator on a three-month project, generously supported by the National Manuscripts Conservation Trust (NMCT), to undertake conservation work for the Adam Smith materials held at the Library. The materials included in the project are an important collection of 18th century letters, bound manuscript notebooks, and other archive materials relating to Adam Smith, numbering around 280 items in total.

When faced with a large task in any walk of life, it can be tempting to roll up your sleeves and just get started, but a vital part of any project is taking the time at the outset to plan. For this body of work, an initial sample survey had been undertaken when originally defining the scope of the project, and I then completed a more detailed survey at the outset of the project with three aims:

Using the categories outlined in the 2003 Preservation Advisory Centre’s Knowing the Need publication, the items in the collection were categorised as being either Good, Fair, Poor or Unusable. 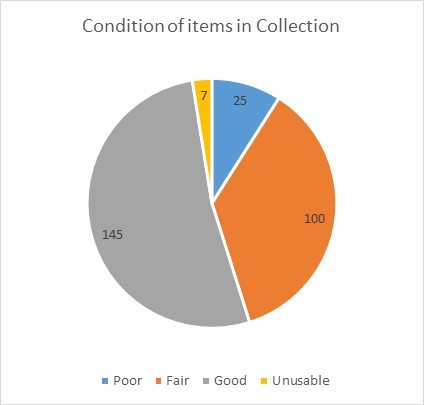 The survey revealed that about half the collection could be considered to be in ‘Good’ condition, not requiring further intervention – these were mostly from a group of 240 letters and documents where the condition of the collection was mixed, and some were in a better condition than others. 97 documents from the same group were identified as requiring conservation treatment, or improvements to their current enclosures.

The items identified as ‘unusable’ were mostly bound volumes, including the 18th century lending lists from the Library, and a manuscript containing student’s notes on part of Smith’s course on Moral Philosophy at Glasgow University given in his last unbroken academic session as Professor there. There was also a tightly folded letter that was so brittle that handling in any way would cause the paper to crack and split at the folds. These were all identified as requiring more in-depth treatments, which I will cover in the next post!

One of the Library lending lists prior to conservation

This tightly folded letter could not be handled without causing damage in its current condition Ref: GUA 15625

As the majority of the items in the collection appeared to be written in iron gall ink, which can be corrosive to the writing surface underneath, the survey also aimed to take a snapshot of the current ink condition rankings (Reissland and Hofenk de Graaff 2000), and note any damage observed.

Inks of all ranks – 1 being stable, and 4 showing losses to the lettering – were observed in the collection. The collection has very good storage conditions, which can inhibit the progression of ink corrosion, so interventive measures – treatments that involve some sort of physical intervention with the object – were only intended to be taken where cracks and losses needed to be stabilised (ranks 3 and 4). The information gathered in this survey will allow for the progression of the ink corrosion to be monitored over time.

With a clear view of the condition of the collection, I could then move forward with planning and undertaking appropriate conservation and preservation treatments over the following months. I’ll be describing some of those on this blog in the next Conservation Keyhole post so keep an eye out for that next week!