The previous article introduced the newly acquired Blackie & Son archive of children’s school textbooks, 1882-1976, and looked at the wider context of the Children’s Historical Collections into which it fits. It’s equally interesting to look at the history of the Glasgow based Blackie & Son publishing firm as it evolved from subscription booksellers to educational publishers and how this was influenced by the ‘Glasgow Style’ art movement, educational reform and philanthropist Vere Foster.

Company history and connections to Glasgow

Co-founded in 1809 by John Blackie, ‘W. Sommerville, A. Fullarton & J. Blackie & Co.’ focussed on the ‘number’ trade, selling paper bound sections of books on subscription, thus enabling those on low incomes and in smaller towns to purchase printed literature for a reasonable price. This would constitute the ‘chief business of the firm throughout the first sixty years of its existence’1.

First located in Black Boy Close, Gallowgate, the company remained faithful to Glasgow throughout its life. Several moves were necessary as the business grew more successful, most notably to 17 Stanhope Street in 1830, the site of Villafield Press. This move eventually brought the printing and selling arms together, and in 1842 the company was renamed ‘Blackie & Son, Publishers’2. A London branch, opened in 1837, paved the way for subsidiaries in India and Canada by the early 20th century, and the firm’s name changed for the final time in 1890 to ‘Blackie & Sons Ltd’ when it became a public limited company. In 1929, a new factory for binding and printing was built in Bishopbriggs on the outskirts of Glasgow and named ‘Villafield Press’ after its predecessor. This location also became the administrative home of the company until it ceased trading in 1991. 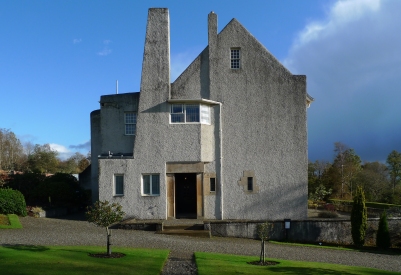 Family ownership was initially maintained through John Blackie’s sons: Walter, John Jr and Robert, all of whom shared their father’s interest in publishing, public life and Glasgow. Walter studied Latin, Greek, Logic and Moral Philosophy at the University of Glasgow and commissioned Mackintosh’s Hill House in 1910; Robert had a passion for the arts, which was to influence Blackie & Son through his links to the Glasgow Style and Talwin Morris; and John Jr, Lord Provost of Glasgow (1863-66), was deeply involved in social issues, bringing forward the City Improvement Scheme in 1857 to tackle the slums resulting from the industrial revolution.

John Blackie believed that books were ‘instruments of enlightenment’3 and early books sold by the firm were predominantly religious, but also included Scottish poetry, technical books and family bibles in which to record births and deaths. A number of factors occurred, however, that would steer the company towards educational publishing. This began with a shift in focus from bookselling to book production in the 1830s, but took effect most significantly due to the Education Act 1870 (England and Wales) and 1872 (Scotland) and the influence of Vere Foster. 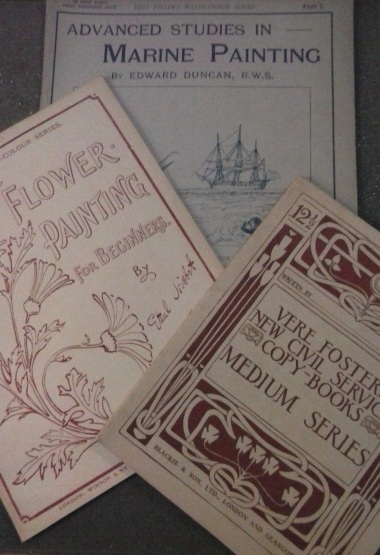 The Education Act made primary level education compulsory and created a sudden need for school books, which motivated Robert and Walter Blackie to fill the gap following the deaths of John Blackie Sr and Jr by 1874. Success in this venture was assured by diplomat and philanthropist Vere Foster who had developed ‘copy books’ to combat illiteracy and poor school attendance in Ireland. Foster leased the copyright of the ‘Vere Foster Writing and Drawing Copy Books’ to Blackie & Son in 1879, which proved so popular that a printing works dedicated to the production of the copy books was established in Dublin, bringing with it the local employment that Foster had envisioned4.

These combined forces put educational publishing high on the agenda and inspired the company to develop a wide range of school books for primary children, particularly readers:

‘The Comprehensive Readers were the first of a stream of school books of every sort – grammars, arithmetics, histories, geographies – to be published by Blackie & Son. In the same year school editions of the classics were issued. Indeed, once their plans were matured, Blackie & Son may be said, in 1879, to have entered the educational field at the gallop.’5

By the turn of the century, Blackie & Son was able to produce picture books for infants, thanks to the introduction of three colour letterpress printing, and their educational output now included books for secondary level education, continuing an early focus on scientific books that would remain throughout the life of the company.

Talwin Morris and the Glasgow Style

A notable aspect of the books produced by Blackie & Son in the late 19th and early 20th century was their distinctive design. In addition to new technology that enabled more sophisticated book binding, Blackie & Son benefited significantly from the addition of Talwin Morris to the company. Initially a designer for Blackie & Son’s subsidiary company Gresham Publishing, Morris became the Artistic Director for Blackie & Son in 1892 and would remain so until his death in 1911. His appointment coincided with the rise of the ‘Glasgow Style’ movement, a Scottish expression of Art Nouveau as defined by ‘The Four’ – Charles Rennie Mackintosh, Herbert MacNair, and Margaret and Frances MacDonald – with whom Morris, himself a ‘disciple of Art Nouveau’, was associated6. Thus, Blackie & Son’s books attained a recognisable look that helped to define and market them. The architectural heritage of Scotland also gained notably from the connection between Talwin Morris and Blackie & Son when Morris introduced Charles Rennie Mackintosh to Walter Blackie, who would later commission Mackintosh to design Hill House in 1910. Walter Blackie would recount in 1943 that ‘during the planning and the building of ‘The Hill House’ I necessarily saw much of Mackintosh and could not but recognise, with wonder, his inexhaustible fertility in design and his astonishing powers of work’7.

The motivation to produce books as instruments of enlightenment became enshrined in the firm’s motto, ‘Lucem libris disseminamus’. As Agnes A. C. Blackie, daughter of Walter W. Blackie, suggested in 1959, the evolution of Blackie & Son from subscription bookseller to prominent educational publisher was ultimately a purposeful endeavour:

‘If any one event in the firm’s history might be called revolutionary it would certainly be the decision, taken in the eighteen seventies, to embark on educational publishing, which proved to be the central stem from which the other modern branches were to grow. Revolutionary too was its effect on the character of the firm, and a nail in the coffin of the subscription business. Yet taken in the context of what came after, it appears as no alien graft, but as a natural growth from the deepest of roots, the passionate faith of John Blackie Senior in the educative power of books’.8

How to request material from the Blackie & Son Archive

The Blackie & Son archive is currently located in the Library Research Annexe. To request material from the collection, make a note of the titles you are interested in from the Blackie & Son archive list, together with their assigned ‘book number’, and submit a request form for each one. Alternatively, you can visit the Library Research Annexe by appointment, 10:00-16:00, Monday-Friday.

Next: The last of three blog articles introducing the The Blackie & Son Archive: Children’s School Textbooks, 1882-1976, will focus on the content of the archive itself, the research areas covered and some notable examples from the collection.

Like Loading...
‹ From the Prime Meridian to the politics of Antarctica : new books in the Library, 2nd May 2017
Weaving the Beauties: the Jacquard wovern fabrics of the Stoddard-Templeton Archive ›