Home › Archives and Special Collections › “A Striking Likeness of an Ass”: marginalia in early-printed books

“A Striking Likeness of an Ass”: marginalia in early-printed books

Blog post by Becca Gauldie, an M.Sc Art History (Collecting and Provenance Studies in an International Context) student, on placement in Archives and Special Collections.

Every second-hand book has a provenance, but most are unremarkable and their previous ownership immediately forgotten as the book falls into the lap of its next owner. Even if that last owner had been significant, often no trace of the person remains. Many of us will have come across books which have had names scored out or even the corner of a page cut off to disguise the source. When written in 1980’s blue Biro, we generally think of these marginalia as a source of irritation and of no worth or significance. But, when we remove a few centuries and look at books from the 1680’s, we think again. Sometimes these scrawls are just straightforward corrections or memory jolts; at other times, they become interesting. Even a straightforward shopping list on the back of a 1715 broadside has a certain charm to the modern eye. 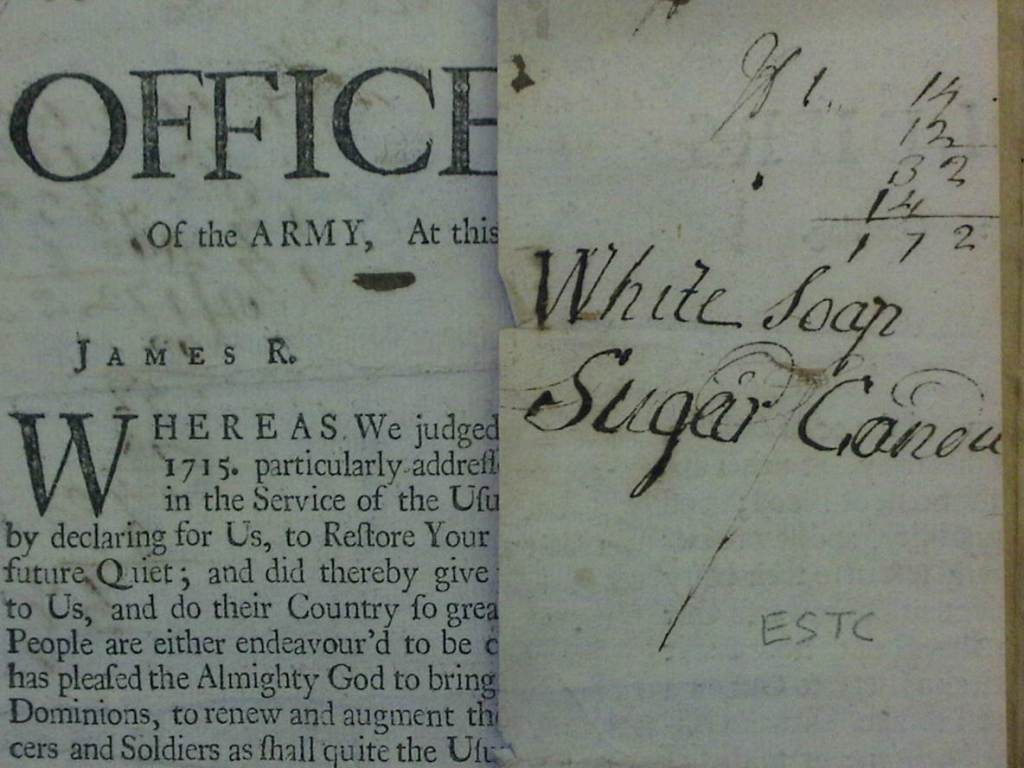 Shopping list on the verso of a broadside relating to The Old Pretender (Sp Coll Mu53-b.15)

On other occasions, the notes are reminders of people who are long forgotten and perhaps have no other memorial than their adolescent scribbles. When Sir William Baird of Newbyth (1654- 1737) lent his children a book, he was probably quite displeased when he found they had written all over it. Sir William Baird, 1st Baronet of Newbyth, seems to have led a rather unspectacular life, marrying twice and having the two sons who wrote all over his book. His first wife – the children’s mother, Helen Gilmour – died the year this book was published, 1701. One of the children, John Baird, born 1686, became the 2nd Baronet and Member of Parliament for Edinburgh between 1715 and 1722. He married, but died in 1745, without having any children. It was he who wrote, “A good name is an excellent patrimony” on his father’s book. His younger brother, Alexander, born 1687, died in 1743 with no heir, drowning whilst “washing himself in a pool” at Burntisland.1 So, the title died out and their story might go untold, if it was not for the childish graffiti of two motherless boys.

A handwritten list of clothes at the back of the Bairds’ book: “7 cravats, 2 westcots [i.e. waistcoats], 2 Holland shams [nb. Holland was a kind of rough linen, used for shirts and the shams false shirt fronts. Instead of changing a shirt, men changed the sham], 2 each(?) cravats, 4 pair of rufels [i.e. ruffles – the ruffles will be for shirt fronts and cuffs and would have fastened onto a plain shirt], 4 pair of gloves, 4 shams, 2 night muches” [i.e. nightcaps called “mutches” in old Scots] (Sp Coll Mu50-c.15)

Another example of the Baird boys’ marginalia (Sp Coll Mu50-c.15)

Sometimes, a book becomes more interesting for its annotations than it was before it was scribbled on. This is arguably true of one particular copy (Sp Coll DN.1.34-36) of John Gibson Lockhart’s Peter’s Letters to his Kinsfolk. The whole of Lockhart’s story is an amusing one, from his descriptions of the Edinburgh book dealers, to his marrying Sir Walter Scott’s daughter and winning a duel he didn’t even take part in. Peter’s Letters, published in 1819 caused a great stir, as he gossiped about the great and good of Edinburgh and Glasgow. But in this case, the book’s annotations are of even more interest.

At least two early to mid- 19th century students conduct a conversation in the margins of this copy of the book.2 One a Whig, the other a Tory, they have lengthy discussions on the politics of the day, and they also draw all over some pages including an engraving of the University Rector, Francis Jeffrey, Lord Jeffrey (1773-1850). Jeffrey was a brought up a Tory, but became a well known Whig, actively promoting the party during the 1820s, whilst Rector of the University of Glasgow. So, the Tory student was his political enemy and had most probably fought his appointment to the University.

“A striking likeness of an ass”. Students doodle all over this portrait off University of Glasgow Rector, Francis Jeffrey (Sp Coll DN.1.35)

Student annotation: “This Lockhart is a great rascal. Hee should be whipt through Edin[burgh] streets” (Sp Coll DN.1.36)

Now one final word from one of the student scribblers in Peter’s Letters to his Kinsfolk:

Student annotation: “…these people Blockheads that write so ma[ny?] things on the Book…” (Sp Coll DN.1.36)

I quite agree with the scribbler here. Whilst I wish people would not write all over the University’s library books (as so many seem to feel the need to do, these days), the culprits might at least leave some identification! Anonymous annotations are not of so much interest to future generations! [ed – public message – under no circumstances is writing on the university library books condoned! Thankyou for your cooperation]

2 The Whig party was dissolved in 1859. We know this drawing was after 1819, because that is when the book was published. Jeffrey became Rector of Glasgow University in 1820, so would have come to the student’s attention at this date. Jeffrey was no longer active by 1841 and dead by 1850. It is most likely that the style of dress the man is wearing in this doodle is contemporary to the drawing. Judging by the style of the man’s frock coat and long pipe and piecing things together, we can assume that this marginalia was penned between circa 1820 and 1835.