The Victorian era featured the rise of the new middle class, a social circle between the bourgeois and poverty that acted as a wealthy working-class, but without women needing to work to help finance the household.  These were the women who shopped for luxury goods at department stores and paid strict attention to social standard and status symbols to keep themselves as part of high society.

The Army & Navy Co-operative Society Ltd catered to this social class, selling necessities such as groceries but also accessories that acted as a sign of opulence.  Circulars from their stores indicate what they sold and what could be afforded by those who shopped there.  While they competed with other London department stores, Army & Navy was initially for military families only, and whilst it was never indicated that membership was reserved for officers over younger recruits a yearly fee for membership, as well as the price and quality of certain goods may indicate otherwise. 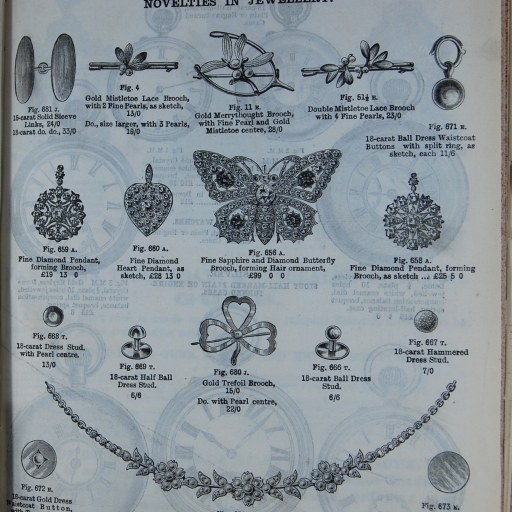 Jewellery in the circulars was sold at a range of prices from 6 shilling and 6 pence for an 18k dress stud, to £99 for a sapphire and diamond butterfly hair brooch . These prices are about equivalent to around £20 and £5,500 today.  And while the difference in price between the cheapest and most expensive items was immense, much like today, the most expensive items like the butterfly brooch were well above and beyond the means of the lower middle class. Jewellery, while a staple even today in a woman’s wardrobe, was the most expensive when it came to individual pieces listed in the circulars, but other items considered necessities in Victorian society, tended to be rather expensive as well. 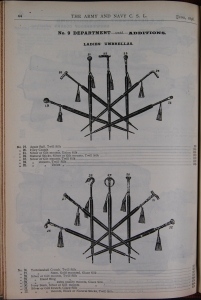 For the Victorians, umbrellas and parasols were essential in day-to-day society, protecting one from the sun and the characteristic rain of Great Britain.  However, the roots of the umbrella’s popularity for the Victorians lie in non-Western civilization, where umbrellas were held over royalty and the incredibly wealthy. This aligned with Victorian beauty standards, where a woman’s pale and unblemished skin separates her from the working classes, where women are instead tanned and aged by the sun. The umbrellas seen above cost between 9 and 42 shillings (around £25 to £120 today), and are made from high quality materials such as ivory, tortoiseshell, gold, and silk emulating the opulence of the non-Western umbrellas that inspired them. While not as expensive as jewellery, umbrellas would have been used more often when taking part in daily Victorian society, and thus likely to have shorter lifespans, requiring them to be bought multiple times.

Like umbrellas, gloves were a means to further separate oneself from the working class by protecting a woman’s hands from sun damage and general use.  Gloves of all types would have been worn on a daily basis for a middle class woman in Victorian society. Above, is a rare photograph (most images in circulars were illustrations due to the expensive of early photographs) and a listing of various types winter gloves available to purchase.  Gloves were not often featured in circulars, despite their popularity, which could perhaps be due to their short lifespan, much like handkerchiefs.  The ones listed range from cheaper Ringwood (knit) gloves (1 shilling and 3 pence)  to incredibly costly real Alaska seal (82 shillings and 6 pence), ranging from around £3.50 to £235 in today’s prices.  However, the prices listed are not what indicate the status symbol of the items, but rather that they were worn daily in public by the middle and upper classes, whether winter or summer.

The British Library states that the average income of a middle-class man (and thus for his family) earned anywhere between £100 and £1000 pounds per year, which keeps in line with what Harries-Jenkins states in The Army in Victorian Society states an officer’s yearly pay to be.  When comparing the price of the luxury goods sold by the Army & Navy Co-operative Society Ltd to what was the income of their average customer, many of the goods sold would have been too expensive for members living on the lower end of the pay scale. This indicates that even with keeping their prices low, the Army & Navy Co still targeted the upper reaches of the Victorian middle class.

Valverde, M., “The Love of Finery: Fashion and the Fallen Woman in Nineteenth-Century Social Discourse.”, in Classic and Modern Writings on Fashion (Oxford: Berg, 2009).

Rappaport, D., Shopping for Pleasure: Women and the Making of London’s West End (Princeton, N.J.: Princeton University Press, 2000). A contextual study of the department store in its West End location in the Victorian and Edwardian eras, focusing on issues of gender.

Further reading on the history of the Army & Navy Co-operative Society Ltd can be found through the House of Fraser Archive online catalogue  , and in Yesterday’s Shopping: Army and Navy Stores Catalogue, 1907, with an introduction by Alison Adburgham.