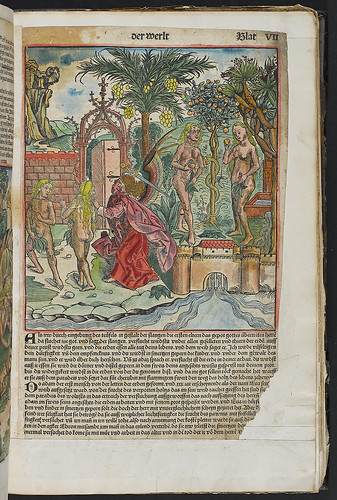 At the end of 2016, the Incunabula website was updated to include 175 images from 56 different texts, primarily housed at the Mitchell Library but including some others at Kelvingrove Museum and the Burrell Collection. This now completes the project work to describe all the incunabula found in various Glasgow libraries. GlasgowMuseums kindly provided access to their Flickr set of beautiful images, which have now been integrated into the catalogue entries on the Incunabula Project website. As well as highlighting evocative images from certain texts, this recent work also draws attention to similarities and differences between various collections and books found in different repositories across the city.

Of the new additions to the website, some of the most lavish and colourful images appear in a German edition of Hartmann Schedel’s Liber Chronicarum (Mitchell Library 895900), widely known as the Nuremberg Chronicle amongst English speakers after its place of publication. Several Latin editions have already been documented on the website, but this German edition is rarer: it is estimated that 1400 to 1500 Latin editions were produced in comparison to only 700 to 1000 German copies. One of the most extensively illustrated texts produced in the fifteenth century, this seminal book combines pictures and text in presenting a history of the Christian world from its inception to the early 1490s, drawing on a range of different medieval and Renaissance sources. It was published by goldsmith, printer, and publisher Anton Koberger, whose other works have been highlighted in various different incunabula updates, including this May 2015 blog on Koberger’s 1483 German bible and its provenance, an entry from the following month which compares two of the publisher’s bibles, and this September 2015 blog on the Nuremberg Chronicle.  (A full list of incunabula updates which mention Koberger can be found by searching the Special Collections blog archive.) In this edition housed at the Mitchell, one hand-coloured woodcut shows Adam and Eve’s expulsion from the Garden of Eden. In the right-hand image they can be seen contemplating fruit from the Tree of Knowledge as a serpent coils up the tree’s slim trunk, while an adjoining scene shows the pair being ushered out of the garden. Another gorgeous woodcut – spread over two pages – portrays the city of Constantinople, nestling between lush green hills and the sea. 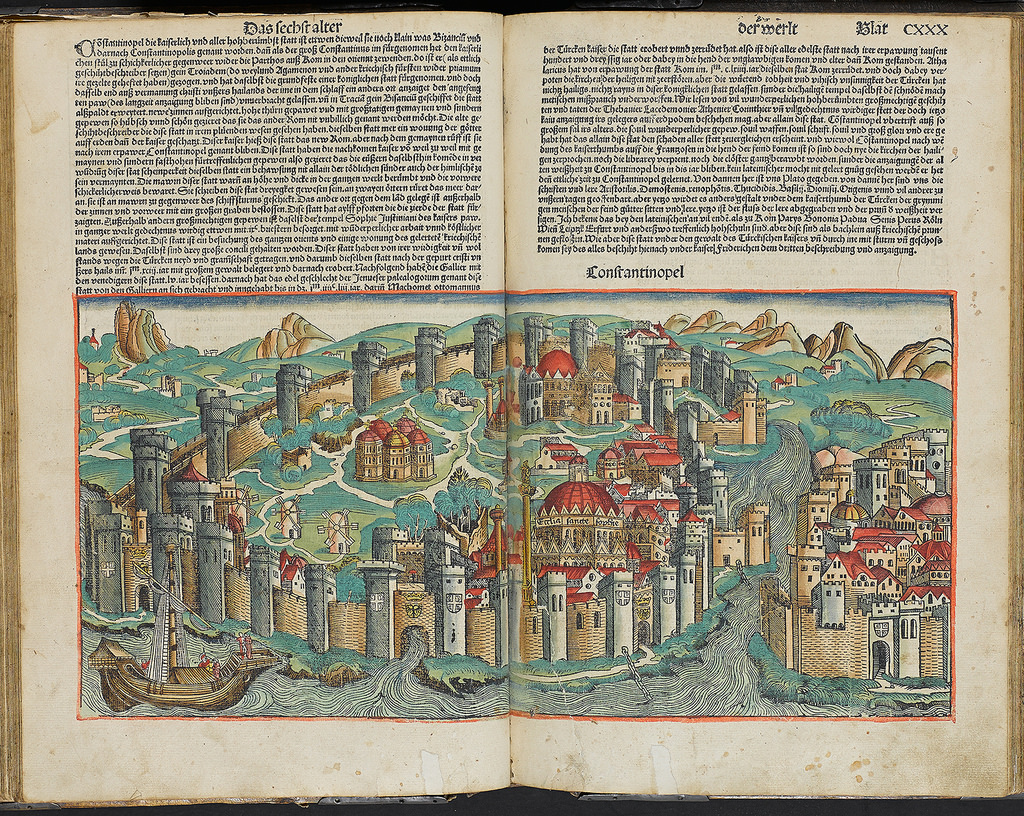 Pictures from two earlier Latin editions of the Nuremberg Chronicle, housed at the Mitchell Library and the Burrell Collection, have also been integrated into the website. Two copies of this text are held at Special Collections, one in the Hunterian library (Bv.1.12) and the other as part of the Euing collection (BD9-a.2). The incunabula page for this July 1493 text now hosts a combined twenty images from these four copies of the book.

In addition to the Nuremberg Chronicle, Koberger was also responsible for printing a 1483 German bible that is held at the Burrell collection (4.1 Bible). Another copy is housed at Special Collections (Euing Add f52), and a brief look at the incunabula webpage for both items shows the differences between the two books. As you can see from the images below, the bindings of these two volumes are quite different: although both are sixteenth-century blind-tooled pigskin over bevelled wooden boards, we can spot distinct differences in the markings and clasps. As with many other of Koberger’s works, both are beautifully illustrated. One hand coloured woodcut illustration from the Burrell collection copy shows the many-headed great red dragon in Revelations, confirmed by the term ‘Offenbarung’ at the top of the page. This beast is widely believed to Satan’s representative, and the idea of the war against heaven is conjured by the image of a winged figure (presumably an angel) slaying some other animalistic beings. 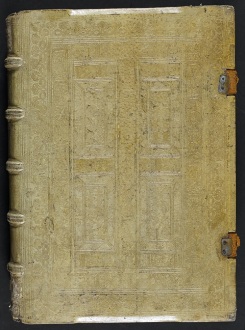 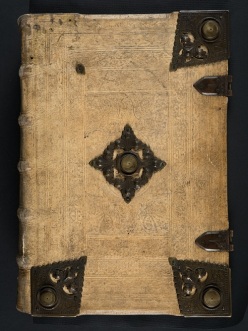 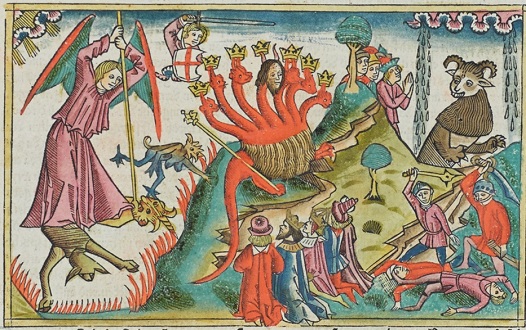 Hand coloured woodcut from 4.1 Bible at the Burrell Collection 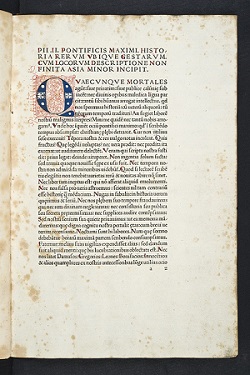 Opening page of Hunterian By.2.17

We can also make comparisons between the opening pages of two copies of Historia rerum ubique gestarum (approximately translated as ‘the history of all events’) by Pont. Max. Pius II. While the University copy housed at Level 12 (Hunterian By.2.17) features a blue letter Q with white and red embellishments, the one housed at the Mitchell (167527) features a solid blue Q. Both texts are rubricated to highlight the capital letters in their main script, but these embellishments appear to be bolder in the Mitchell Library’s copy, with more extensive underlining by an early reader. These new pictures also allow readers of the website to see the differences in bindings. The Hunterian copy of the text is bound in 18th-century mottled calf, with gold-tooled spine and red-edged page leaves. The Mitchell library copy has a 20th-century gold-tooled olive morocco binding, with gilt-edged leaves and a binder’s stamp on the rear cover. 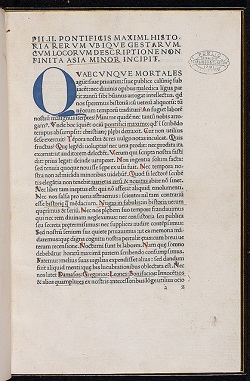 Other treasures from this Flickr set include a page of text with copper engraving and patriarchal cross from Dante Alighieri’s La Commedia (1481), a beautifully decorated page from an undated Latin bible, an intriguing woodcut diagram from Marcus Tullius Cicero’s Orator (1492) and an annotated page with woodcut initials from Cicero’s De officiis (1496). The full set of images can be viewed on Glasgow Museum’s ‘Mitchell Library – Incunabula’ Flickr group. You can also see the full range of books housed in other libraries but catalogued as part of the Incunabula Project on the Incunabula web page. As well as being able to compare and contrast different editions, these updated catalogue entries also allow us to make connections and establish overlaps between Glasgow’s various different libraries and repositories. We can see from the provenance pages which benefactors donated to which institutions: William Euing (1788-1874), for example, bequeathed incunabula to both the city of Glasgow and its university. 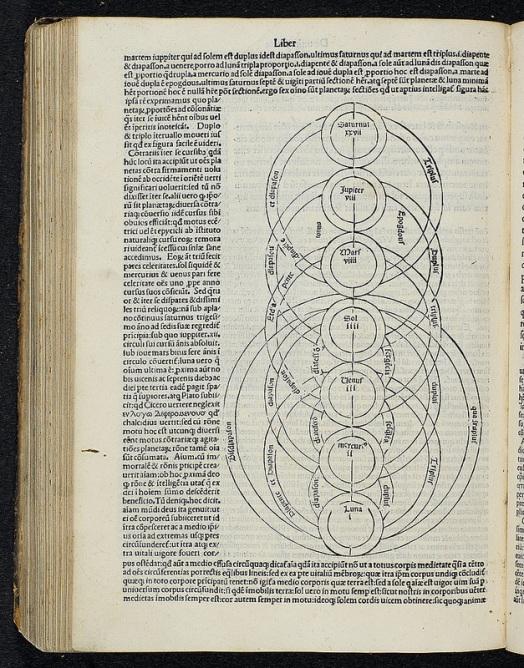 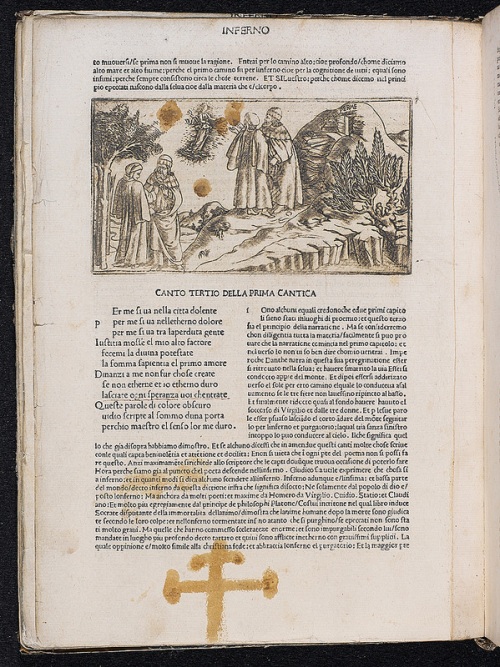 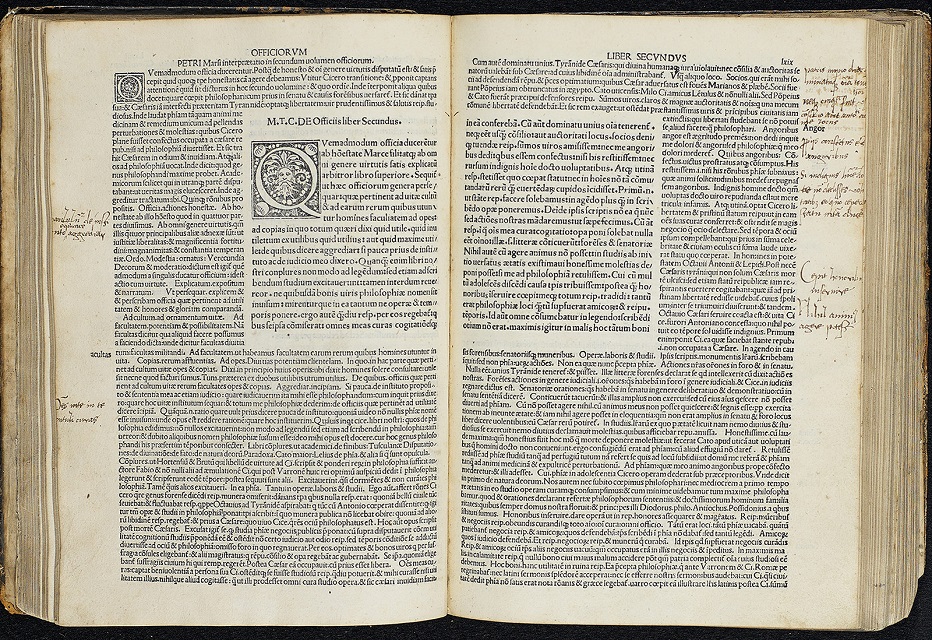 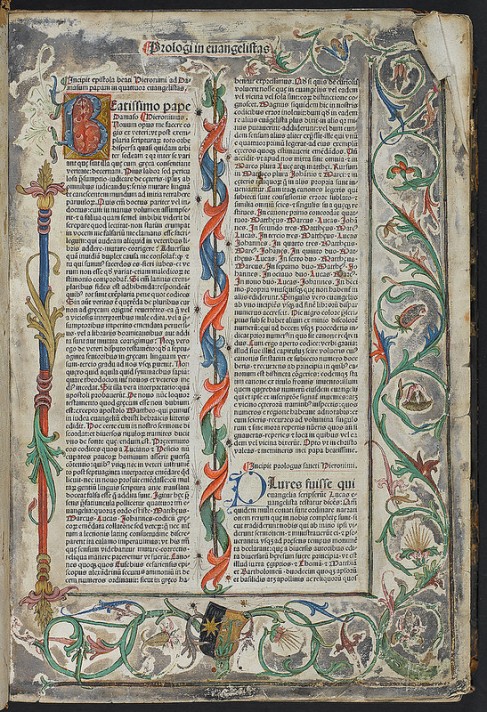 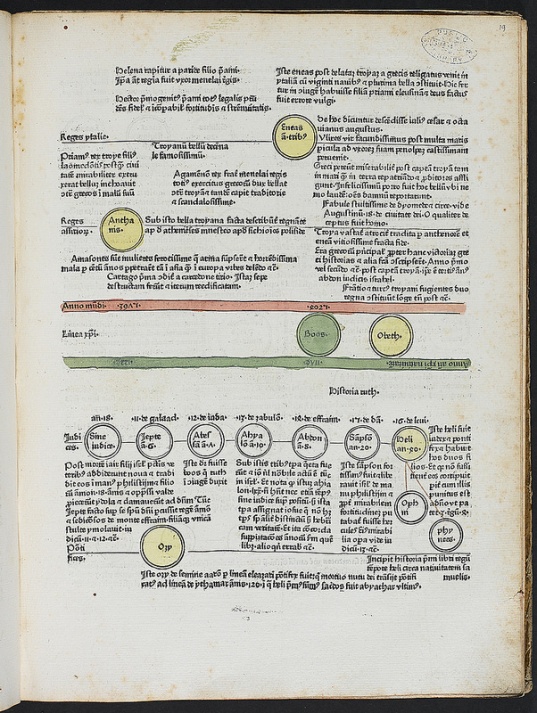