First Year students to Universities have been referred to as ‘Freshmen’ or ‘Freshers’ since at least Victorian times and the University of Glasgow has always had an interest in welcoming ‘Freshmen’ into University life. As we welcome the 2016 intake to campus this week, we’ve taken a look through the University Archive collections to find out more about the early years of Freshers’ Week.

The Students Representative Council (SRC) was instituted in January 1885 with the stated aims of representing the students in such matters as affected their interests; affording a recognised means of communication between the students and the University authorities; and promoting social and academic unity among the students. They looked out for the welfare of students, including new student to the University, and their ‘Amusements Committee’ planned and organised activities.

While Freshers were included in these general student activities, we begin to see mention of dedicated Freshers activities in the late 1920s. It appears that the first incarnation of ‘Freshers Week’ was a week-long Freshers’ Camp. Freshers’ Camp most commonly took place in Auchendennan at Loch Lomond and would include talks, games, sing songs (as seen in the image below from 1949) and other activities to help the new starts bond with each other and to help them find out about University life. 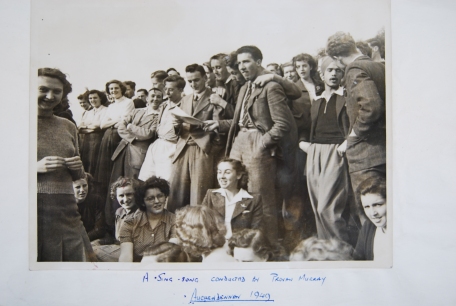 The Freshers’ Camps were first set up by the Student Christian Movement but, in 1928, SRC members suggest that the SRC should be responsible since “that in this venture the SCM had had as its aims many which were common with that of the SRC”. In 1929, the SRC minutes record that preparations for the next Freshers’ Camp are well underway and they look forward to a big success.

These Freshers’ camps were, indeed, a great success and ran well into the 1970s. The first edition of the Glasgow University Guardian (then called the ‘Gilmorehill Globe’) from 1932 reports on the Freshers’ Camp that was held at Balmaha that year. “The project proved a great success, and fully maintained the standards of recent years’. The article reports activities such as boating trips, football matches and climbing Ben Lomond. It was hoped that “the spirit of comradeship which was so evident at Balmaha will be carried by the “freshers” into their activities at Gilmorehill. 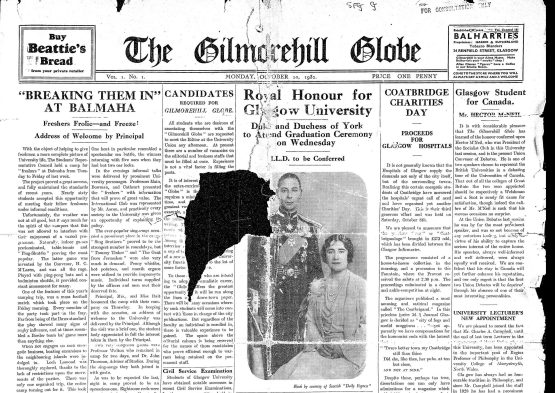 By the 1960s we begin to see records of a ‘Gilmorehill Camp’ that ran alongside the camp at Auchendennan – this suggests the SRC are bringing Freshers’ activities back onto Campus and catering for students who do not wish to camp out at Loch Lomond. In the late 1970s to early 1980s Fresher’s week went through a phase of being known as ‘Week Nothing’ or Week ‘0’ with a programme of activities on campus to induct Freshers’ into University life.  However, by the 1990s the welcome activities had became known again as ‘Freshers’ Week’. On Thursday we’ll be sharing some #throwback images of the Freshers’ Camps via social media. If you would like to find out more about Freshers’ Week or visit one of our reading rooms to view our collections then please email library-asc@glasgow.ac.uk.