Guest blogpost by Casci Ritchie, a postgraduate student studying Dress and Textile Histories on placement in the University of Glasgow archive services. Casci has been working on digitising department stores catalogues from the House of Fraser archives and making the content more accessible online to researchers and students. Find Flickr albums of examples of textile swatches and colour illustrations found within the House of Fraser archives here.

The department store John Falconer situated at 65 Union Street Aberdeen sold everything a women could desire –  from exotic furs to the latest in lingerie. The period of the 1930s was a transitional period for fashion and this was reflected within women’s undergarments. Restrains of strict corsetry were beginning to subside after the flappers of the 1920s who broke free from the constrains of the corset and opted for brasseries and slips. Although many young women were choosing to wear the fashionable brassieres such as this ‘Forma’ example below, corsets were still worn throughout the 1930s but were perhaps worn by older women who grew up wearing the undergarments. 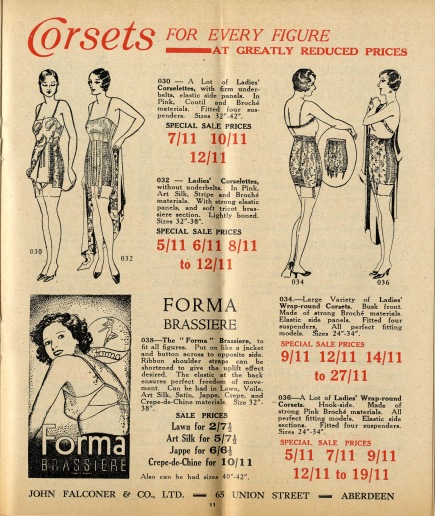 An example of an innovative ‘Forma’ brassiere on sale alongside more traditional corsetry in the John Falconer January 1932 sales catalogue.

As lingerie was evolving, textiles were also  adapting to the new freer styles of undergarments. This advertisement for ‘Le Gant’ corsetry included within the August 1933 catalogue shows the change in attitudes towards underwear. Companies were producing easier to wear garments with technological advanced textiles such as ‘lastex’. ‘Le gant’ translated means ‘the glove’ which portrays the new manner in how lingerie was being worn, like a ‘second skin’. Items such as brasseries and corselettes are seen here produced in ‘Youthlastic’ with the promise of “the firm control of cloth, and the comfort of elastic.” 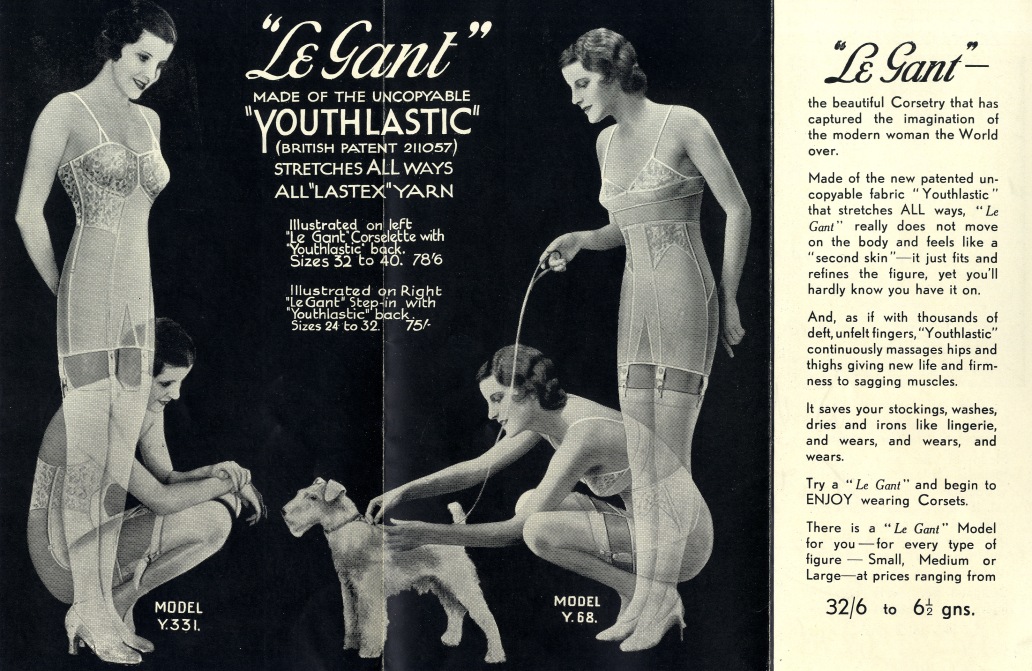 Some initial research has been carried out into the “Le Gant” collection and it would seem these designs were produced by the American Warner Brothers Corset Company. The company was created in 1874 and enjoyed successes with innovations such as the rust proof corset and in 1913 purchased the patent for Mary Phelph Jacob’s invention – the brasserie for just $1500. By the 1930s the company was experiencing financial difficulties and were trying to adapt to the changing styles of lingerie by utilizing new materials such as ‘Youthlastic’ which promised “you’ll hardly knew you have it on.” This is a departure from the constrictive corsets and is reflected in the advertisement showing young fashionable ladies looking effortlessly agile in their new shapewear practicing stretches and even playing a spot of tennis. 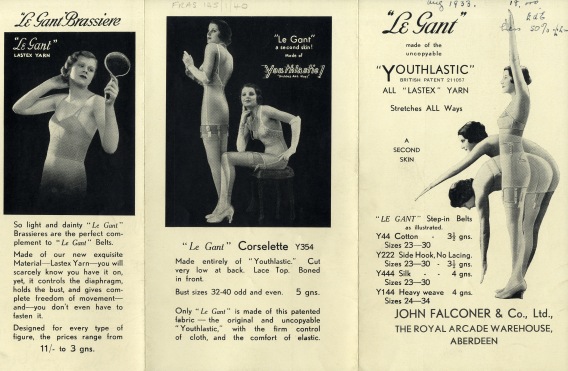 An example of a “Le Gant” leaflet showing ladies exercising in their lingerie from the August 1933 John Falconer catalogues.

This coincides with the health craze sweeping across both Britain and America in the 1930s. People were being to understand the benefits of exercise in their lifestyle and it was fashionable for ladies to partake in sports such as swimming. It is understandable that underwear had to progress to adapt to the changing needs of the women of the 1930s.

Further reading on the history of lingerie and the Warner Brothers Corset Company : ‘Uplift: The bra in America’ by Jane Farrell-Beck and Colleen Gau (University of Pennsylvania Press, 2002).

Like Loading...
‹ The changing illustrations in One Thousand and One Nights
John Logie Baird Collections: a Celebration, Thurs 14th April 2016 ›