From the start it has been our intention to make GIP a truly ‘Glasgow’ project and our project researcher Jack Baldwin has been visiting other city institutions in the past year to examine and describe all the fifteenth century books known. Delighted to be sharing the results of this collaborative effort, we are now adding details of these incunabula into the project website. The latest uploaded batch therefore documents one book from Strathclyde University Archives and Special Collections, and five books from the Royal College of Physicians and Surgeons, Glasgow. 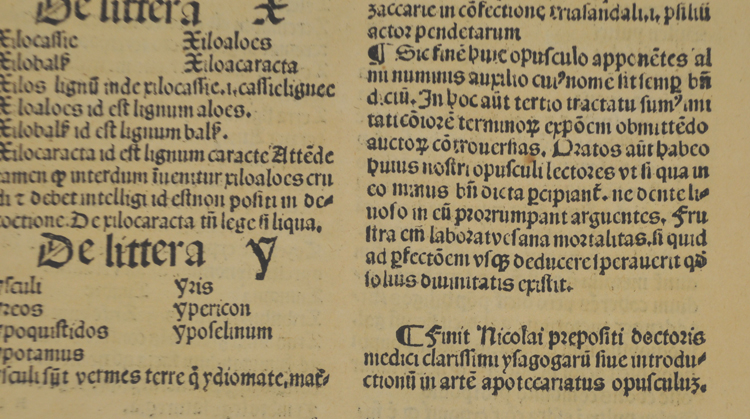 Colophon from Praepositus (or not!): Strathclyde University

It is fascinating to see the overlap in the various Glasgow collections. Chemistry is an obvious connection between our rare book collections and those of Strathclyde University. The Strathclyde copy of the pharmaceutical treatise Dispensarium ad aromatarios by Nicolaus Praepositus is from the collection of James “Paraffin” Young (1811-1883). This fantastic collection contains books and manuscripts on alchemy and early science dating from the 15th to the 19th century. Does this sound familiar? It is described in great detail in a printed bibliography – the Bibliotheca Chemica – compiled by none other than John Ferguson, (1838-1916), the Regius Professor of Chemistry at the University of Glasgow from 1874 to 1915. Ferguson’s own collection of alchemical and chemical books was purchased by the University of Glasgow in 1920. Not surprisingly, the two Glasgow collections often get confused! Although published in 1906, Ferguson’s bibliography is still a truly authoritative work, and well worth a read for the erudite background information it supplies on many obscure authors and their texts. In consulting the entry for the Dispensarium, for example, Ferguson explains that this work is not in fact by the twelfth century author Praepositus at all (whoever he was):

The accounts of this person are so vague, and are so irreconcilable with each other, that it is plain the historians have hardly any facts to go upon … Though passing under his name the present treatise is not by him, but, according to Choulant, is a production of the fifteenth century, as appears by the authors quoted …

Ferguson goes on to suggest that the name of Praepositus has been given to this treatise simply to give it authority.

The Strathclyde incunable is a duplicate copy of a book we also hold at the University of Glasgow; our book is not, however, actually found in Ferguson’s collection as you might have surmised (although he surely would have liked a copy), but rather in the Hunterian Library. Hunter’s motivation to acquire this item would undoubtedly have been on account of its medical slant, and here we have another clear subject synergy with the collections of the Royal College of Physicians and Surgeons of Glasgow (RCPSG).

The RCPSG Library was founded in 1698, and holds many fine examples of important historical texts, with particularly strong representation in medicine, surgery, botany and materia medica from the 18th and 19th centuries. The oldest incunable in the College is the 1479 edition of a medieval medicinal-botany text by Serapion the Younger – the Liber Aggregatus. While the library was founded with donations from Faculty members, the exact provenance of this book and most of the other four incunabula held by the RCPSG today remain obscure. However, it is  speculated that several may have been purchased in 1869/1870 since the Librarian’s annual reports in the Faculty minutes make special mention of purchases of “works of the older medical authors”. Whatever their origins, we are certainly lucky in Glasgow today to have such strong collections of early printed medical material available to researchers.

Look out for books held by Glasgow Life at the Mitchell Library coming soon.

The latest books to be added to the project website are: