As part of a Club 21 placement I have been researching the history of student political societies at the University of Glasgow and over the coming weeks I will be sharing the results of my research. The fascinating collections held by Archive Services include extensive minutes of meetings, reels of correspondence, and several eye-catching posters, photographs and political pamphlets. The sheer quantity of material is testament to the impressive level of political engagement by Glasgow students from the 1850s onwards, which I hope to showcase below and in upcoming blog posts.

One of the less well known political societies was the Glasgow University Distributist Club, which I have been investigating over the last few weeks.  The Distributists were always proud of being just a little bit different from other political parties. In a century in which wars were fought in the name of ideology, the Distributists were unashamedly moderate in their political outlook. The movement claimed to represent a ‘middle way between Capitalism and Socialism’ by combining economic Liberalism with Catholic social teachings. Even in the era of the Post-War Consensus, the differences between the two meant that the prospect of a middle way between Capitalism and Socialism was almost unthinkable. And yet – the Distribs spent their time trying to reconcile the two. Although they tried their best to avoid extremities, the movement could be thought of as a radical alternative as they consistently challenged the Establishment position on both the political Left and Right. 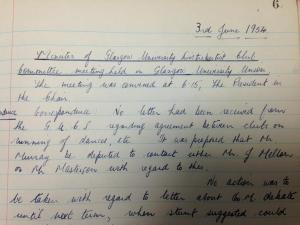 It is not surprising that the Glasgow University Distributist Club was one of the smallest political societies on campus. The national profile of the movement was very low, and even those who knew of its existence were not entirely sure what it stood for because of the difficulty in placing the party on the ideological spectrum. Its association with Catholic social teachings led many of the Club’s political opponents to insinuate that it only existed to promote the agenda of the Catholic Church. In the 1955-56 Student Handbook, the President of the Labour Club wrote that ‘under a Distributist regime we would revert back to early Victorian or even feudal times; because the Distribs “feel that the old standards of normal independent life have yet to be surpassed.” This “normal independent life” sounds good, but the task of defining the word “independent” is specifically the Pope’s.’ Attacks of this nature were particularly resonant given the long history of Sectarianism in Glasgow.

The President of the Distributist Club described Distributism as “not merely a political theory but a way of life. We dislike change for change’s sake, but we feel that the old standards of a normal independent life have yet to be surpassed. We believe that a man has the right to be independent, that he has the right to own property, and that his home should be his castle. This way of life has been regarded as sane and normal since the world began. It is still regarded as such by the majority of the world’s population, and we have made it a political formula solely because we see on the one hand the collapse of Western private capitalism and on the other the danger of Eastern State capitalism.’ A moderate worldview, perhaps, but the reality on campus was rather different.

In Union debates the Distributists advocated a national living wage, the sale of public housing, the abolition of compulsory national insurance payments, and the introduction of the ‘principle of payment’ for some NHS services. They presented themselves as a moderate alternative, but the Distributists were developing a radical ideology which transcended the traditional Left-Right divide.

By the mid-1950s, the Club had come to be strongly associated with Irish Nationalism. The minutes from 1955 show that committee members tried to elect two ‘jailed Sinn Fein MPs’ as Honorary Vice-Presidents of the Club. The following year the Gilmorehill Guardian reported an allegation that one of the Club’s office-bearers had ‘given the impression to new members that the Club was ‘merely an Irish Nationalist organisation.’ It is fair to conclude that whatever else the Club might have stood for, the minutes of committee meetings indicate a recurring preoccupation with the cause of Irish Nationalism.

Although the Distributists were in many ways fundamentally different from other political parties on campus, they were not exempt from the occasional scandal. The Gilmorehill Guardian reported on the 27th April 1956 that one of the presidential candidates, Mr Slorach, ’had invited his friends’ to join the Club on the morning of the Annual General Meeting in order to boost his chances of winning the presidential election. According to the paper, a ‘large number’ of the new members were Mr Slorach’s contemporaries at the Dental Hospital. Mr Slorach won the presidential election by two votes, but was eventually expelled from the committee along with two of his associates at a meeting on the 9th May 1956. The committee then hastily passed a series of amendments to the Club’s constitution in order to prevent a similar scandal in the future.

Amidst damaging allegations of vote rigging, the Club had some significant financial problems too. The minutes from March 1955 record a deficit of £28.10 (in old money) and there was a regular entry relating to a debt. The 1956 Rectorial Election also created some difficulties for the Club because the committee could not agree which candidate to nominate or support. The issue was hardly discussed at all during meetings throughout the year, but the committee eventually (and reluctantly) agreed to support Lord Gibson’s Rectorial campaign.

Although they considered themselves to be above ordinary politics, the minutes of the Glasgow University Distributist Club show that it was riddled with equally as much infighting and division as any other political party on campus. At a national level Distributism was thought to be a moderate political theory, but at Glasgow University the Club was a lot more radical due in part to its implicit support for Irish Nationalism and its willingness to speak out against any consensus forged by the mainstream political parties. Despite their lack of coherence and their irrelevance in national political discourse, the Distributists were by all accounts formidable debaters. They were regularly ridiculed by their opponents and their membership was relatively small, but the Distribs added to the political diversity of Glasgow University’s student community.

Due to falling membership, the Glasgow University Distributist Club disbanded in the late 1970s.

Check back next week for the first of a two-part blog on the Rectorial election campaigns from the 1870s to the present day.

Want to learn more about the Distributist Club and other student societies whose records are held at Archive Services? If so, please see our source guide: http://bit.ly/GUStudentSocs