Prologue and progress: the Boat Club connects with its archive

Our series on University sports history continues now in a tone fitting for the graduation period and this year of commemoration as current Boat Club publicity officer, Emma Baxter, reflects on the Club’s recent archival discoveries.

Act II, Scene I of Shakespeare’s The Tempest sees Antonio, Prospero’s foolhardy and power-hungry brother, try persuade Sebastian to kill his brother. Perhaps an ominous opening analogy, but stay with me! Amongst Antonio’s persuasions he utters,

‘Whereof, what’s past is prologue; what to come, in yours and my discharge’. (Act II, Scene I)

Between murderous intent comes ‘What’s past is prologue’, a phrase that is inscribed on a statue at the US National Archives Building in Washington D.C., and it is a sentiment that resonates.

Glasgow University Boat Club (GUBC) was established in 1867, and holds a prologue of a heady 147 years and also the position of one of the oldest sports clubs in the University. Recently I was lucky to be able to take a trip to the University Archives, where 147 years of history stopped being a bragging right and our Club archive manifested in the form of minute books, photographs, letters and other correspondence. As a club run by and managed by students, it is clear to see that they have always been at its heart.

Here students documented the highs and lows of the varsity boat race with Edinburgh, a race that just cemented its 137th year in May 2014, the purchasing of boats, the raising of funds, the agony of race organisation and the fostering of relationships with other boat clubs in the UK and Ireland.

With minute books dating back to the early twentieth century, it is clear to see that not much has really changed, but that we are also a world apart. A scrapbook entry dated June 1919 shows and names the crew that raced against Edinburgh in our annual race on the Clyde. Fresh from the Armistice in November 1918, it places the club and its student rowers in the context of a changing and developing Europe.

As we commemorate 100 years since the start of WWI and 70 years since the D-Day landings in WWII, the minute books held by the Archives show a lull in activity during the war years, as student rowers became more than members of GUBC.

The Club has recently deposited information at the archives: programmes from races; menus from dinners; AGM minutes; and membership cards. While it may seem trivial to deposit a menu for a dinner half a century ago, it all adds to the fabric of the club. 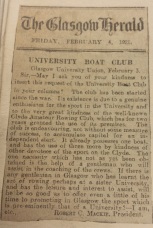 As a club we are currently in a period of development with the appointment of a Director of Rowing, strong performances throughout the year from both male and female club members and a strong novice interest that bolsters and drives the club forward. An article in the Glasgow Herald from February 1921, shows an appeal made on behalf of the club for help to get GUBC up and running again following the war; ‘Its existence is due to a genuine enthusiasm for the sport in the University’. While written 93 years ago, it is a statement that can be continuously and currently applied. Antonio tells Sebastian that history is important, but the onus on moving forward and developing is on them. GUBC are lucky in that we have a strong, rich precedent to drive us forward, and that we have the information held by the archives to act as our prologue as we enter a new chapter.

If your sports club or student society would like to deposit material in the University Archive, don’t hesitate to contact us!