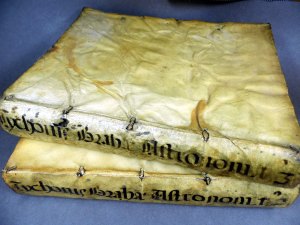 In support of Banned Books Week, a US-based initiative celebrating the freedom to read, I thought I’d draw attention to an interesting item I recently stumbled across in our book stacks. Two attractive* quarto volumes of Tycho Brahe’s astronomical works, both printed in 1610. Peeling back the limp parchment cover reveals a titlepage with some additional scribbled script: below Tycho’s name, someone has written “Auctoris damnati; sed hoc opus cum expurgatio ne permissu[m]”. This translates roughly as “Damned author; but this work is permitted with expurgations”. Damned author? What on earth is going on here? Well, by turning the page and looking on the verso of the titlepage things become clearer. The same hand has written: “Expurgatus a D. Michaele Pedro Comissario S[an]ct[e] Inquisitionis iuxta indicem librorum expurgatoru[m] novum. 1632. El Dom. M. Pedro” – or, “Expurgated by Michaele Pedro, Commisioner of the Holy Inquisition concerning the new Index of expurgated books, 1632”. So, this volume has been inspected by the Spanish Inquisition and has been censored to comply with the Catholic Church’s Index of forbidden books! 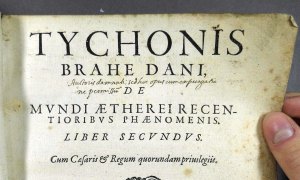 The Index of forbidden books, or Index Librorum Prohibitorum, was first issued in 1559 and was intended to prevent the contamination of the faith or the corruption of morals through the reading of theologically erroneous or immoral books**. While control of the list was originally assumed by the papacy, gradually local ecclesiastical authorities, like the Inquisition of Spain, began to publish their own lists (though these were only considered binding in their own jurisdictions)***. Not all books on the list were banned outright; in some instances, following expurgation and correction as stipulated in the Index, the book would be allowed – Brahe’s works appear to be of this category.

All very interesting, but how surprising is it really, to find an astronomical work on the Church’s forbidden books index? It is well known, after all, that the Catholic Church was opposed to novel astronomical works that were seen to contradict scripture. Both Copernicus and Galileo had been listed on the Index, why not Tycho too? But something strange is afoot, since Tycho did not buy into the controversial heliocentric system (where the Earth orbits the Sun) like the other two men. Instead – based on a belief that it was impossible for the Earth to move (a belief he shared with the Catholic Church) – Tycho posited a geo-heliocentric model, where the Earth sits at rest, orbited by the Sun, around which the other planets move****. Endorsed by the Jesuits, the Tychonic system became the cosmology of choice for the Catholic Church in the early years of the 17th century, since it fitted with astronomical observations but didn’t contradict scripture*****. So why was his book on the Index at all? 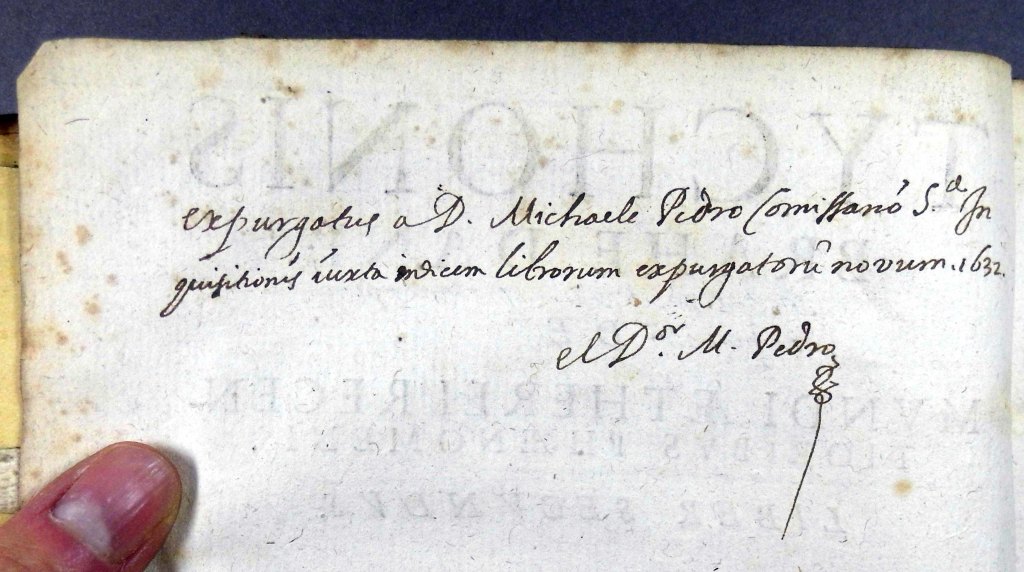 George Haven Putnam provides the answer in his work The censorship of the church of Rome and its influence upon the production and distribution of literature where he discusses the character of expurgations ordered by the Spanish indexes:

“[The Index] stipulates the cancellation, in bibliographies or other works of reference, of the following terms when applied to [listed heretical authors]: vir optimus [excellent man], pius [pious], bonae memoriae [fondly remembered], doctissimus sapientissimus [most learned and wise], princeps eruditorum [foremost in learning] … etc. … The Spanish editor goes on to say, that such titles as doctor and magister can, strictly speaking, properly be ascribed to no one outside of the [Catholic] Church ; the reference is to cases in which these titles have been given by heretical universities whose authority is not recognised by the Church.”****** 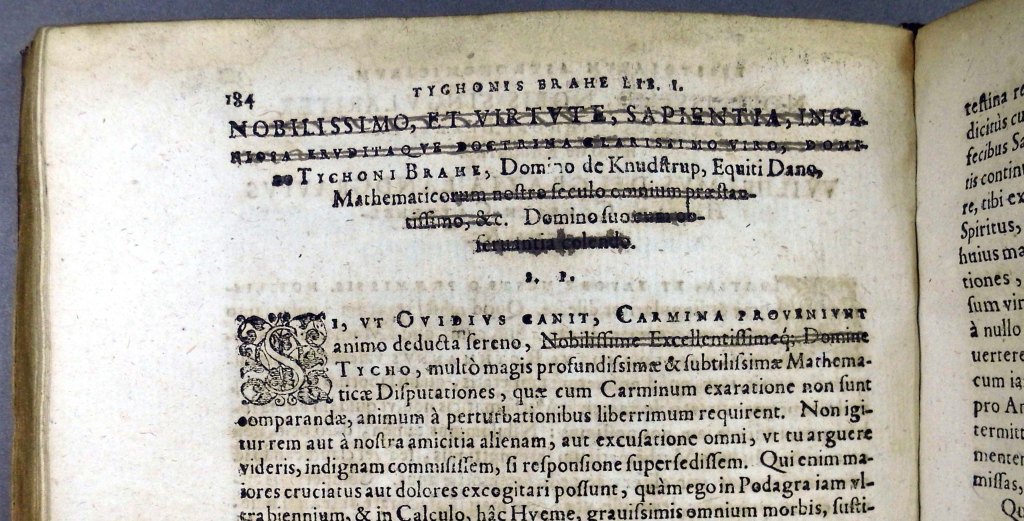 Expurgations made by the Inquisition (Sp Coll Hunterian R.5.18)

A comparison of the text confirms that honorific titles like “Noblissimo, et virtute, sapientia, ingeniosa erudite que doctrina clarissimo viro” [Noble, and virtuous, wise, learned genius who is a famous teacher] have been scored out when referring to Tycho. So, while the text of his astronomical works were perfectly acceptable to the Church, Tycho himself, a heretical northern European Protestant was an auctore damnatio who needed to be brought down a peg or two!

*bound in limp sheep- parchment with an impressively inked manuscript title running down the spine. Spotting this item is yet another symptom of my already self-confessed parchment bindomania…
** Brittanica Online “Index Librorum Prohibitorum” (accessed 25th Sept 2013)
*** Putnam, George Haven The censorship of the church of Rome and its influence upon the production and distribution of literature (New York, 1906), v.1, p.4
**** Gingerich, Owen The book nobody read: chasing the revolutions of Nicholas Copernicus (London, 2004) p. 69, 76; Thoren, Victor, E. The Lord of Uraniborg: a biography of Tycho Brahe(Cambridge, 1990), pp. 278-9
***** Pantin, Isabelle “New philosophy and old prejudices: aspects of the reception of Copernicanism in a divided Europe” Stud Hist Phil Sci 30 (2) 1999, p.247
****** Putnam describes this action specifically in response to the publication of the Madrid Index of 1640. The inscription on our Tycho is dated 1632, suggesting perhaps that this sort of expurgation was already taking place following the publication of the Seville Index of 1632.