The University of Glasgow has a long history of offering part-time courses for adults. The Centre for Open Studies was formerly known as the Department of Adult and Continuing Education and during the early 1970s four issues of an annual magazine, EMU (ref: ACE14/1-4) were published. It was dedicated solely to the creative output of the students of the Department of Extra Mural Education (hence the title EMU).

The four issues feature a variety of prose, poetry, photography and factual writing. Issue No. 1 is remarkable as it includes an early publication of Liz Lochhead’s poetry. The quality of her work was recognised at the time as the poem ‘Revelation’ by ‘Elizabeth Lochhead, Glasgow’ is placed on the opening page of the inaugural issue. ‘Revelation’ is perhaps Lochhead’s most famous poem – it is frequently anthologised and is a popular choice as a set text for both Higher and A-Level English students. The body of the poem is accompanied by an illustration by Lochhead, a graduate and past Writer-in-Residence of The Glasgow School of Art. The nose-ringed ‘black bull’ is shown tensing his chain – the black-on-white printing of the magazine adds to the darkling imagery of the verse. 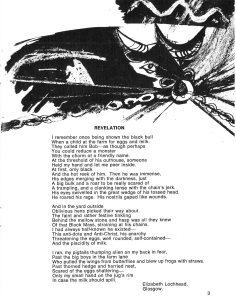 Another Lochhead poem, ‘Obituary’, is also printed along with illustrations. Both were later published in Memo for Spring (1972), her first collection of poetry, which one a Scottish Arts Council Book Award.

During the period of EMU’s publication, Liz Lochhead was a member of Philip Hobsbaum’s now legendary creative writing group alongside other Scottish writers such as Tom Leonard, Alasdair Gray and James Kelman. Issue No. 2 features the earliest known publication of Kelman’s short story ‘He Knew Him Well’, a vignette about the suicide of a war veteran told in the near-monologue of an old man in a pub. The text is an earlier version of the story that was later published in its definitive form in Kelman’s first collection, Not Not While the Giro (1983). One minor revision, for example, is that the veteran is named ‘Jim’ in the EMU version, while in the later version he is named ‘Dennis’. Perhaps Kelman decided to alter the character name to avoid any identification with himself – he is known as Jim to his friends and peers.

Early versions of writing give us insights into the craft of drafting and honing words. Issue No. 1 of EMU includes ‘Swing, Hammer, Swing: An extract from a novel in progress’ by Jeff Torrington (1935-2008). The extract describes the difficult life of Tam Clay, whose Gorbals home is about to be demolished while his wife is in hospital about to give birth.

While the EMU magazine editors, Ann Karkalas and James G MacDonald, were able in Issue No. 3 to congratulate Liz Lochhead and James Kelman on having books published, it wasn’t until 1992  that the whole of Swing, Hammer, Swing! was published in its final form. It beat Alasdair Gray’s novel Poor Things (a set text in the University of Glasgow Department of English Literature) to win the Whitbread Book of the Year Award in 1992. Alasdair Gray wasn’t bitter, however, as he compared Torrington’s novel to a Scottish Ulysses in his obituary for the Independent.