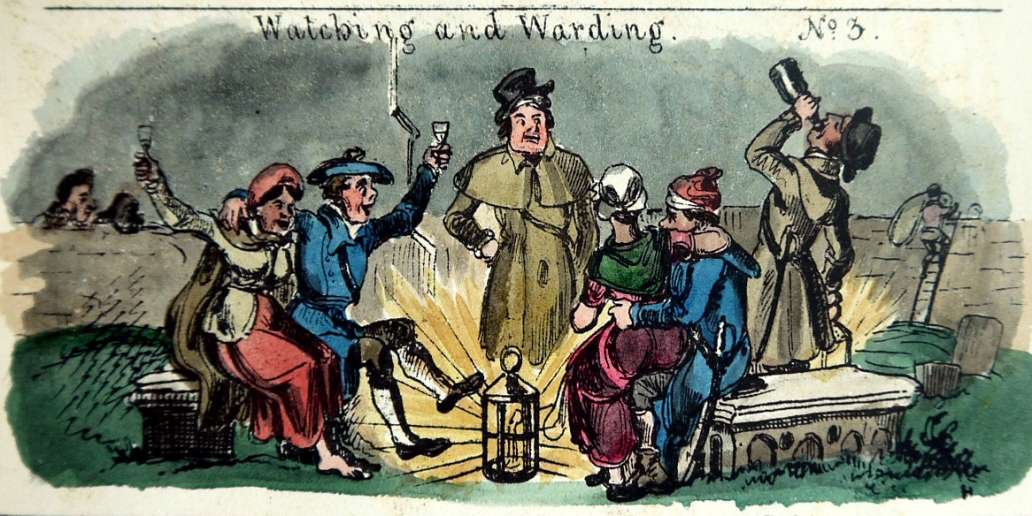 Some ‘distracted’ graveyard watchmen with body-snatchers in the background. From the Northern Looking Glass, 1825 (Sp Coll Bh14-x.8)

The Caledonian Mercury for December 16th 1819 reports a curious case appearing before the Edinburgh Police Magistrate: on his way home from a drunken night out, a poetry-loving tailor leapt the fence of the Canongate kirkyard to pay his respects at the graveside of the celebrated Scottish poet Robert Fergusson. However he was quickly stopped in his tracks by an armed watchman who handed him over to the police. On account of the tailor’s intoxication the judge was lenient, handing down a suspended fine of forty shillings, only payable should he transgress again. All very amusing, but the story begs just one question, why did the graveyard have an armed guard? Well, the answer can be found later in the article:

Same morning the church-yard was surrounded by about nine men some of them well known to be resurrection men, but the watchman cocked his blunderbuss, and declared that he would blow out the brains of the first man who entered, upon which they made off. It is understood that two or three bodies had been buried there on the preceding day; and it is a fact that the watchman was some nights before offered three guineas to allow access to the church-yard, which he refused.

An anatomical drawing of lung tissue. This sort of detailed description of the lung was impossible without dissection. (MS Hunter HF 116)

Resurrection-men – or body-snatchers – were names given to grave robbers active in the 18th and early 19th centuries who dug-up freshly-buried corpses to sell to anatomy schools and medical students for dissection. This grisly practice was borne of a distinct shortage of fresh cadavers for the numerous university and private anatomy schools across the country. By the mid 18th century medical teaching was based on firm empirical foundations: in other words, for a medical student to really know how the body worked, he would have to get right inside it – something only achievable through human dissection. Each medical student, therefore, needed a supply of fresh bodies to dissect which was not necessarily easy, as Helen MacDonald explains: “What medical men did with the dead contravened deeply held social beliefs about how human beings should properly be dealt with, post mortem. It mattered that bodies were treated with respect and buried whole for all kinds of reasons, including an expectation that the dead would rise in bodily form on God’s final judgment day”. One way of alleviating the problem was the so-called Murder Act of 1752 which furnished anatomists with the bodies of recently executed murderers. But in truth, this simply did not provide sufficient specimens, so the anatomists turned to black-market bodies, illicitly disinterred under the cover of darkness by resurrection-men! 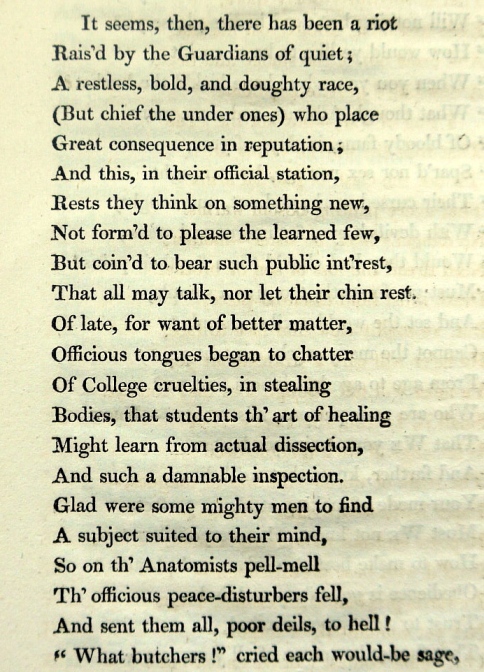 Special Collections holds a range of interesting primary sources relating to this unsavoury practice, including newspaper articles, broadsides, poems and illustrated caricatures. These fascinating items shed light on different aspects of this unnerving practice, from the public’s angry reactions to it, and their attempts to counter it, to details of punishments meted out to offenders and even poems in defence of the anatomists.

The University of Glasgow – with its active medical school – seems to have been directly involved in the gruesome practice of body-snatching. The shortage of legitimate bodies available for dissection is apparent from a letter written to a court official by the University Principal, Duncan Macfarlan, in November 1823. In it he bemoans the decision to give the corpses of two men awaiting execution at Ayr to the anatomy professors at Edinburgh University rather than those at Glasgow – a complaint that clearly highlights the deep anxiety university staff felt over the shortage of available specimens. But in truth there had been a shortage of bodies for quite some time, resulting in students resorting to illicit means to secure their dissection subjects.

In 1803 the professors had to call in soldiers to protect the university buildings from a mob angry at its links with grave robbing (the buildings survived, faring better than an anatomy theatre in Aberdeen which was destroyed for similar reasons in 1831!) and in 1813 the university passed a new rule expelling any student implicated in the crime of grave robbing. Yet, numbers of anatomy students continued to rise and the demand for cadavers kept increasing. Despite the university’s own law there are suggestions that students continued to be involved in body-snatching (perhaps even with the complicity of the university itself!) for many years after 1813. In a letter to the medical journal The Lancet from May 1826 (vol 6, issue 140, pp. 184-5), a recent student of the university’s medical school corrects an earlier letter-writer, who claimed that unlike in Edinburgh, Glasgow students actively assisted the resurrection-men in digging up bodies: the ex-Glasgow student assures us that this is untrue, when he studied at Glasgow dissection subjects were provided to all students at four guineas each, and those paying were not required to go out and dig up bodies; however,

“That there are students in Glasgow who do go out with the resurrection-men I have no wish to deny, but mark the consequence of their so doing. The anatomical lectures are given to them gratis. They also have their dissecting free of charge, as a recompense for their aid in contributing to the supply of subjects given to those who pay for them”.

A broadside of roughly the same period tells the tale of a Glasgow medical student who attended a mother in labour and – with the child being still-born – took the dead body in lieu of payment. Being seen to make off with the baby under his coat, the student was pursued by the mother’s neighbours resulting in him throwing the body off a bridge in attempting to make-good his escape. At this, he was chased down London Road by a “multitude, several of whom appeared to be anxious to inflict instant punishment”. With this sort of activity going on, it is really no wonder that anatomists and medical students were unpopular!

Matters reached a head in the late 1820s with the notorious case of Burke and Hare, two Edinburgh-based resurrection-men who turned to murder as a more effective means of obtaining fresh subjects for the anatomy school. This case (and similar cases of ‘burking’) caused an outcry and not long afterwards the Anatomy Act of 1832 effectively spelled an end to body-snatching by expanding the legal supply of cadavers.

This unpleasant and gruesome episode in medical (and indeed university!) history is long gone thankfully. And for any prospective Glasgow medical students reading this – don’t worry, dedication to your studies no longer requires you to bring your own shovel to university!

If you’d like to learn more about body-snatchers this Halloween, please feel free to pop up to Special Collections to see any of the items mentioned above. And, if you are visiting London at any point over the next few months, the Museum of London have a fascinating exhibition running until April, Doctors, dissection and resurrection men.