It is the turn of the Divinity students to graduate today, along with those of English and Scottish literature.

Today, therefore, we just had to feature the pioneering divinity student Olive May Winchester , who graduated with a BD in 1912.

Olive May Winchester (1879-1947) was the first woman to be admitted to study for and to graduate with a Bachelor of Divinity Degree at the University of Glasgow. She was born in Monson, Maine (USA) and first matriculated at Glasgow in 1909 following her BA degree from Radcliffe College in 1902. She was awarded several prizes during her BD degree at Glasgow including the ‘Jamieson Prize of £10 for examination in subjects BD’ and also the ‘Cleland and Rae-Wilson Gold Medal for Church History’. 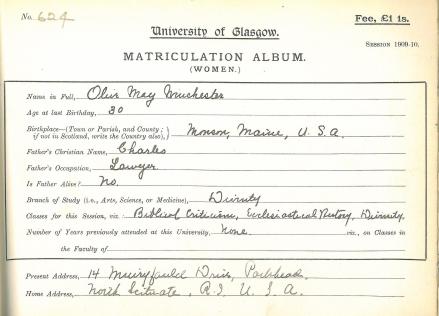 The 100th anniversary of her ordination was recently celebrated (11th May 2012) with an academic conference and an exhibition in the University of Glasgow Chapel. You can find out more about Olive from the blog post covering the celebrations and her University Story profile.

In the prize lists we found a David Forsyth (BD1912) who was in the same class as Olive Winchester and who also won many Divinity prizes throughout his university career. He frequently appeared in the top five students of his classes and a selection of his prizes include: first place for Aramaic and Arabic, first place for the essay prize in Hebrew and Semitic Languages and also ‘The MacFarlan and Cook Testimonial Prize of £21 for Examination in Greek, Moral Philosophy, Hebrew, Church History, and Divinity’ which he won in his last year of study. Like Olive, he was a very high flying student!

We also found an MA student who excelled in Arabic, Hebrew and Semitic Languages. Robert Stevenson (MA 1912) won many prizes for these languages including the ‘Cleland and Rae-Wilson Gold Medal’ for Senior Hebrew class and the ‘Glasgow University Oriental Society’s Prize’ for Arabic in the session 1909-10. The Oriental Society began in 1880 and its role was to ‘promulgate its interests in the ancient Near East, from Mesopotamia to Egypt, from Assyria to Israel: Biblical studies, new archaeological discoveries, new scholarly ideas about ancient society and its achievements.’(DC250/3/2/1)

Congratulations BD graduates and we hope you follow the successes of your 1912 counterparts!