Another ten books are now fully described and indexed on the project website:

The binding of our copy of Berchorius’ commentary on the Bible (Sp Coll BD7-c.2) initially presented us with a puzzle. 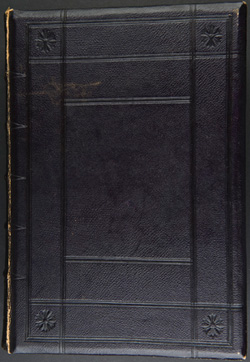 In researching the book’s provenance, Jack Baldwin discovered that it had belonged to George Offor (1787-1864), the literary editor and book collector whose library included a substantial collection of  Bibles and Psalters. According to a manuscript note in the book, it was purchased at the sale of Offor’s library in 1865. Using the  digitised annotated copy of the Bodleian Library’s Offor sale catalogue, Jack identified its purchaser as the London bookseller Edward Knight (who bought it for £6.10.0); he, in turn, sold it on a year later to the Glasgow book collector William Euing (1788-1874). Euing himself noted this acquisition in the book (“27. 2. 66 Knt”), thus confirming the transaction. The book was presented by Euing to the University of Glasgow in 1872.

This is all so far fairly straightforward. However, in checking the entry in the Offor sale catalogue, Jack was intrigued to find that the binding of the Berchorius was there described as a “… very fine copy in the original oak boards, recovered with blue morocco, and edges gilt …”. This is curious because the book today is found in a 19th-century dark blue/black grained morocco binding over wooden boards; it bears the ticket of the Glasgow bookbinder, J. Carss & Co., and another annotation reveals that it was bound on October 19, 1867 (for 22/6). So this raised the question – if the book was a fine copy, why on earth would Euing commission a rebind? All the evidence suggests that it must be the Offor copy, so what can have happened?

Some delving into the ODNB entry on Offor offers a possible explanation. His library of some 4,000 books was to be sold by Sotheby, Wilkinson & Hodge over eleven days from 27 June 1865 onwards . However, on the third day of the sale, a disastrous fire destroyed many of the books. Although this book was sold on the first day of the sale, it is quite likely that it was still in the auction rooms at this point. Evidently salvaged from the blaze, perhaps the original binding was damaged beyond repair. So it seems that this book is a lucky survivor – which is rather fortunate for us today, as it is indeed a rather fine copy, with some very nice decoration.

Salvaged from the flames? Folio a2r from Sp Coll BD7-c.2.